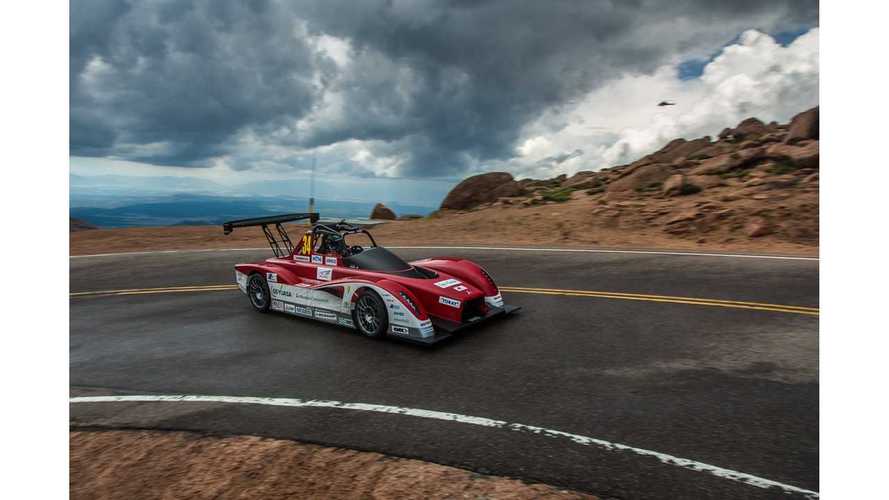 Now we know without a doubt that it was the rain that took away a first-ever podium finish for EVs in the 91st edition of Pikes Peak International Hill Climb race.

Mitsubishi (who finished 2nd and 3rd) noted after the event:

"The race, held on June 30th, commenced in the morning under a calm, clear blue sky; however these ideal weather conditions took a turn for the worse and a downpour of rain hit the track just before the pair of MiEV Evolution II race cars commenced their runs at this legendary time trial event."

"Just as Greg Tracy – who was the fastest qualifier within the Electric Vehicle division – approached the time for his run up the mountain, the poor weather forced the team to make a quick tire swap to grooved tires rather than the higher performance non-grooved racing slicks. Both Tracy and Masuoka raced in extremely difficult wet conditions, along with limited visibility in the higher sections of the race course, resulting in Masuoka recording a time of 10 minutes, 21.866 seconds, with Tracy following closely behind at 10 minutes, 23.649 seconds."

Finishing in second place in the Electric Division for a second year in a row, team captain and driver Masuoka commented on the race:

"Just before the start, since the road became completely wet, we had to swap the tires from slicks to grooved. Even with the grooved tires, the pavement was really wet and the car was sliding around quite a bit. It really was treacherous conditions to drive in, but both cars were able to make it to the top safely. Since we were aiming for the win, the result is quite disappointing. While due to this rain, it is easy to blame the result on our luck, we must also realize our weakness and continue to make improvements for the future."

For Greg Tracy, this was his first Pikes Peak attempt piloting a race car rather than a motorcycle. While disappointed by the outcome, Tracy reflected upon his difficult ascent to the summit:

"Since I was aiming for the win, I am thoroughly disappointed. Due to the heavy rain that came pouring down just before our run, the conditions were not drivable. With that said, we should probably be satisfied just by finishing safely. Since it was dry during every practice session, we literally had zero time in the car in rainy conditions. However, since the MiEV Evolution II ran so well in the dry, I really would like to come back to do this again, aiming for the win."

If you look at the various photos and videos it is amazing that they could even manage such results given the conditions.

Fastest in the electric class, Nobuhiro "Monster" Tajima in E-RUNNER, was running in the wet, but still managed a 09:46.530 time and took ​​fifth place in the overall standings. Martin Dowdle of the Giti Tire European Technical Center hand cut tread grooves just prior to the run at the Pikes Peak International Hill Climb.

It is possible that race times could have come down even below 9 minutes and 30 seconds without rain.

Latvian vehicle eO PP01 didn't finish (who knows, maybe that was due to the wet track).