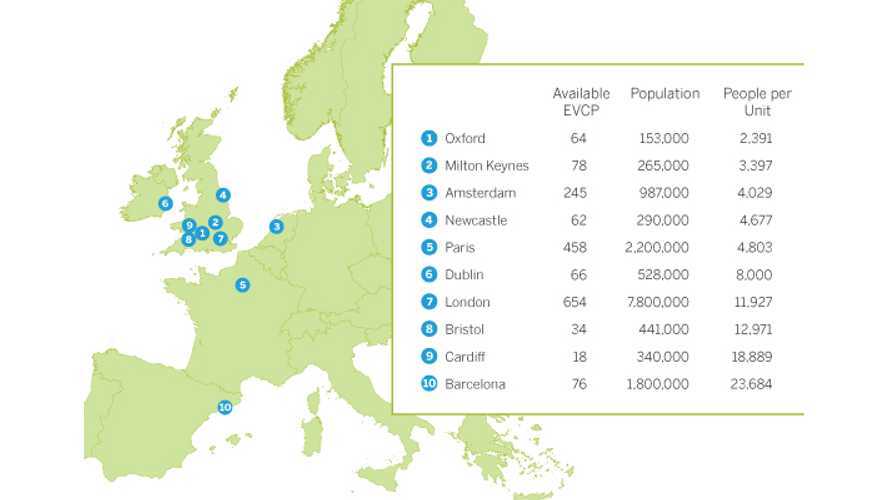 This Graphic Does Show Oxford Leading the Way, But Still Goals Have Not Been Met

Even the most well laid out plans sometimes fail to materialize.

Useless if Always Occupied By ICE

Oxford (a city in central southern England with a population of 150,000 or so) was to become Europe's electric vehicle capital, at least that was the optimistic goal.  However, several recent setbacks push Oxford well behind other leading European cities.

Transport minister Norman Baker unveiled grand plans back in 2012 to transform Oxford into Europe's EV leader.  The scheme called for some 100 charging points to be installed by Chargemaster and for rental agency Hertz to establish an electric vehicle fleet that could be rented out by the hour.

Neither of those two projects were completed.

Oxford still has far less than the 100 charge points and Hertz says "operational problems" have prevented the setup of the electric rental fleet.

What's more is that the existing charging stations have been used a total of just 79 times since the first one was installed in June 2011.

Sure, there aren't many electric vehicles in Oxford, but that plan was to establish a vast infrastructure and to make available those rental EVs to encourage electric ownership.

Since those plans never materialized, it's now believed that Oxford has no shot at becoming Europe's EV capital.

Oh, there's one more problem: Oxford never establish a law to prevent ICE vehicles from parking in charging spots, which essentially renders the chargers useless.  Well laid out plans?  We think not.