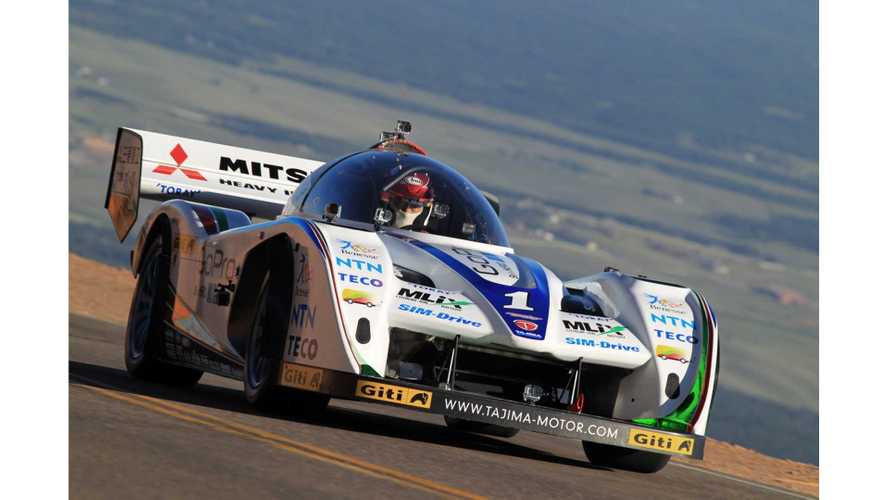 Tajima, driving the Monster Sport E-RUNNER Pikes Peak Special, clocked a 9:46.530 time, which is the first ever under 10 minutes for an EV. Victory by Nobuhiro "Monster" Tajima was expected last year, but technical problems eliminated E-RUNNER. So, this year is E-RUNNER's revenge.

This year's record is about 29 seconds better than last year, which represents a major advancement for electric vehicles. This result is also fifth best in the overall standing of over 140 drivers, while last year, the fastest electric vehicle was sixth overall. What's more interesting is that, if Tajima was only half a second quicker, he'd of placed fourth place and if four seconds quicker, he would of landed on the lowest level of the podium.

Unfortunately, tremendous progress was made also by several ICE teams. The overall winner of the race, Sebastien Loeb, set an amazing time of 8:13.878, but the vehicle seems to be slightly wider than the electrics competing and is certainly more powerful.

To reduce the gap to the leaders EVs will need to be redesigned again and get more power - maybe 600 or 800 kW or possibly even 1 MW and, of course, more energy in the batteries.

Looking on the results (full list), you must remember that changing weather conditions and rain distorted competition and that some teams didn't have the chance to drive as fast as others.

Second place among electrics was Carlin Dunne on a Lightning Motorcycles bike at 10:00.694, a very solid result - the best in class Exhibition Powersports and tops among all motorcycles!  Unfortunately, the result is about 15 seconds slower than last year's record for Dunne (on an ICE bike) and therefore there's still room for improvement in this area.

Qualification winner Mitsubishi Motors failed to meet expectations, although it may have been caused by changing weather conditions and rain falling from time to time.

Certainly, one would expect more, especially as the qualifying results were better than the year before and the team was counting on victory in its class. However, the results are weaker than last year's.

Toyota confirmed that the competition had been hit by the rain, which slowed the TMG EV P002.

"The TMG EV P002 electric race car’s chances to repeat its record and class win at Pikes Peak International Hill Climb were frustrated by the weather."

"Rod Millen in the TMG EV P002 was among the group affected by the wet weather and he completed his run in 10minutes 24.301seconds to finish fourth in the electric class. Second to fourth places were covered by less than three seconds."

"Practice runs had shown the TMG EV P002 likely to break the electric record of 10mins 15.380secs it set last year. However, a slippery track made it impossible to improve on that mark."

"The car finished 16th overall after another trouble-free run for TMG’s electric powertrain."

A few of the next spots are occupied by motorcyclists from Exhibition Powersports-Z class - mostly on Zero Motorcycles. Interestingly, Ted Richard, on a Amarok P1A, had atime: 12:53.612 - slower than some Zero's.

Unfortunately, Janis Horeliks, driving the Latvian eO PP01, and Japanese Ikuo Hanawa in the Yokohama HER-02, did not finish the race. Horeliks crashed - no injuries reported. This is obviously a shame, because the PP01 eO had posted a first section time that was slower than only the E-RUNNER.