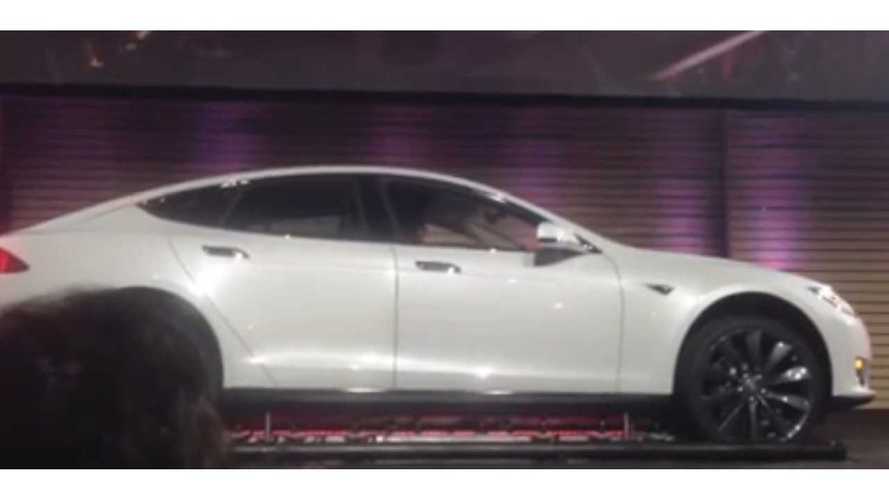 Leave it to Tesla to always put on a big show; no basic press releases here as Elon Musk took his customary stage front position to introduce the world to battery swap technology all over again.  (and please don't talk about Better Place's failures at Tesla's Hawthorne Design Studio tonight)

Two Model S sedans hit the stage (red and white), and Tesla went 2 for 2 on the swap, both in under 90 seconds, while footage of a single gas car being refuelled played on a screen above the demo.

For the swap itself, cars are driven up on rails, much like at a car wash, then the car is lifted somewhat off the ground to take weight off the wheels, and an automated swap happens underneath.  From there you go about your extended drive and return Tesla's pack later.  Neat stuff.

“I think it is important for us to address concerns that people have, we need to address the reasons that people aren’t buying electric cars. People need to feel that they have the same level of freedom as a gasoline car.” - CEO Elon Musk at demonstration

Tesla Tweets Out Some Info On Battery Swapping

You can also choose to keep the pack, and Tesla will "bill you the difference" later if your borrowed pack is newer.

As for the stations themselves, they will be situated on the busiest corridors first (think I-5 in California out of the gate, and with the Boston-D.C area to follow) - future stations will be selected based on consumer demand; which makes sense as Tesla's pegs the cost at around $500,000 a depot.

Each station is said to house around 50 battery packs per station for consumer swaps, with the first coming online by year's end.

Past, Present And Future Model S Cars All Benefit From This New Development

What is the cost for a battery swap?

Tesla did not put an exact number on it during the presentation itself, but Elon Musk stated that it will be equivalent to around a tank of gas...unfortunately we are not talking about a car that has an equivalent fuel efficiency to the Tesla Model S sedan's 88 MPGe rating.  Think more of a light truck, as numbers like $60-$80 an exchange were thrown around.

Tesla Wants To Make You Forget All About This

It should also be noted that users will pay the swap price both on the initial exchange and when they return to pick up their old pack (fully charged).

Tesla does note that for people not so keen on returning to the swap station or keeping the new pack indefinitely, drivers can continue to use the borrowed pack, and Tesla will return their original pack at the owner's request for a yet-to-be-determined “transport fee."

Mr. Musk feels Tesla's supercharging stations are still the main way to go for a recharge on the fly, but if the consumer is in a hurry, or is unconcerned with the traditional cost of a gas fill-up or two, the battery swap is a viable option...and removes yet another barrier in the minds of people when it comes to purchasing an all-electric car.

Question most heard during the presentation?  Can I swap out my 60 kWh battery pack for a 85 kWh one?  Yes, you can.  You can even keep it forever; just be prepared for a serious invoice in the mail.

Check out the video stream of the entire battery swap demonstration below:

Front row spectator prospective of the swap (YouTube via TeslaMotorsClub)