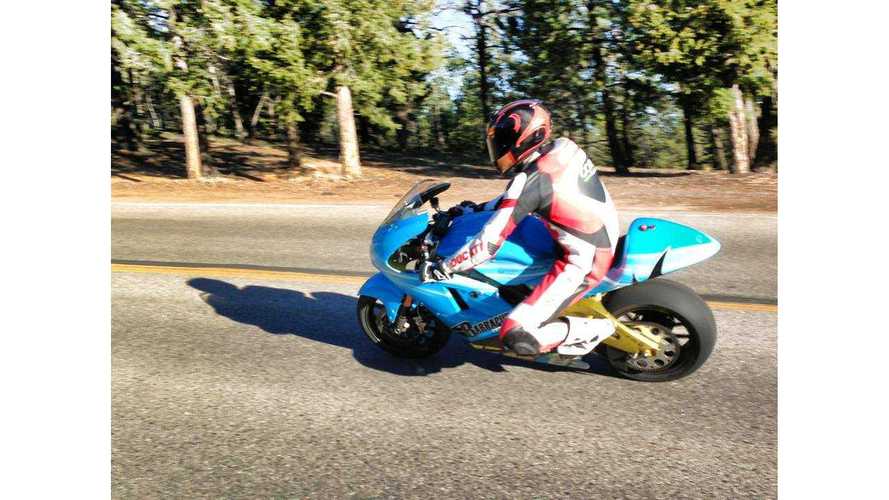 In the two-day tire tests before the Pikes Peak International Hill Climb race in Colorado Springs, electric Lightning Motorcycles were faster than all ICE motorcycles.

Carlin Dunne - from Lightning, and also last year's winner on the Ducati Multistrada 1200 S - not only had the best time in tests, but in fact was comparably as quick as in 2012, when he set a new course record for motorcycles.

During the first test on the lower section, Dunne did 4:34.03 time (14 seconds quicker than Greg Chicoine’s 450 cc supermoto) and on the upper section the following day, Dunne did 5:04.40 time  (3 second advantage over the competition). Dunne's complete time is excellent at 9:38.43, but the actual race course is a bit longer then these two tire-test sections.

"I have a chance to be a part of something even bigger, to prove something to the rest of the world by riding this amazing electric bike.  And I have to say, I’ve been testing it for a month, and it’s insane.  It’s power and acceleration is like nothing I’ve ever ridden.  When you light that fuse, hang on."

In theory, the result of the actual race could be even quicker - because the bike setup will be better and riders will start only once on the bottom section. On the other hand, the entire route will be slightly longer and the battery pack will be at a low state of charge at the upper section - we believe that in the tests the batteries were fully charged prior to each of the two sections.

Unfortunately, and contrary to previous announcements, Greg Tracy will not start on an Amarok motorcycle (he chose instead to go in a MiEV Evolution II) and Chip Yates resigned as the second Lightning Motorcycles entry.

But the excellent results in tests leading up to the Pikes Peak International Hill Climb gives us hope of a win in the mountain race for the Lightning Motorcycles team.