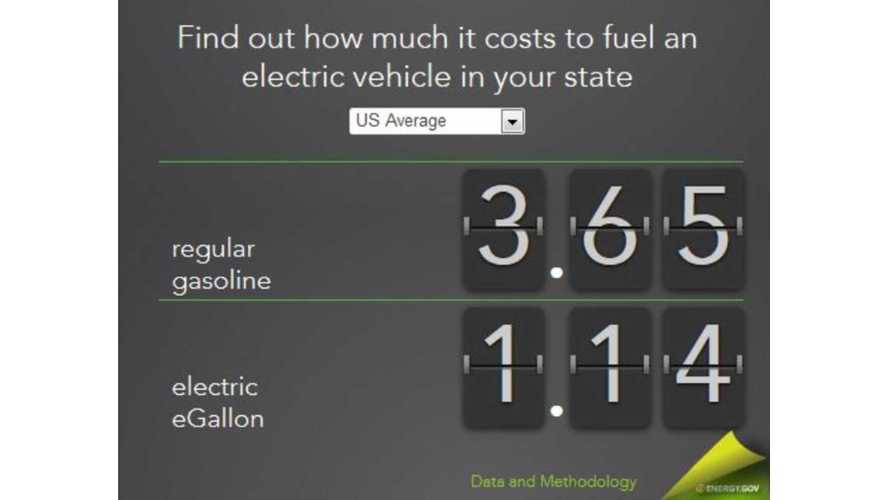 "How much does it cost to commute to work or drive across town? The price of gasoline is posted at every corner gas station, but what about the cost of driving on electricity? The Department of Energy’s eGallon provides a quick and simple answer to this question and allows electric vehicle (EV) drivers to see how much they can save on fuel by using electricity instead of gasoline."

"The price of an eGallon tells consumers how much it costs to drive an EV the same distance you could go on a gallon of unleaded gasoline in a similar car. It’s that simple. We take the average distance that a gasoline-powered vehicle can drive on a gallon of gas (28.2 miles for comparable 2012 model year cars), and then calculate how much it would cost to drive the average EV that same distance."

"For most drivers, a trip to the fuel pump is an easy reminder of the day-to-day cost of gasoline or diesel. But for electric vehicle (EV) drivers, who typically charge their car at home, there isn’t a similar measurement to determine the cost of driving on electricity. To help both current and potential EV drivers better understand the cost of driving an EV, the Energy Department created the eGallon."

Those are the words of the Department of Energy's Director of  Office of Public Affairs, Dan Leistikow.

Here he's describing the DOE's just-launched eGallon calculator, which is a nifty tool that assists electric vehicle owners and potential buyers in comparing the cost of electricity per mile to the cost of gasoline.

Again we turn to the DOE for more explanation on how this eGallon comparison calculator works:

"The eGallon represents the cost of fueling a vehicle with electricity compared to a similar vehicle that runs on gasoline. For example, if gasoline costs $3.60 a gallon in your state and the eGallon price for your state is $1.20, that means that for $1.20 worth of electricity you can drive the same distance as you would for $3.60 worth of gasoline."

Why do gasoline prices swing so wildly? Does the same thing happen with eGallon prices?

"Gasoline prices are tied to the global oil market, which is driven by international events that are difficult to predict, control or prepare for. Unrest in an oil producing country on the other side of the world can drive up the price of gasoline in your neighborhood, seemingly overnight.

In contrast, the price of electricity is determined by local markets or state utility commissions. This means that electricity prices tend to be very stable over time -- creating a lot less uncertainty about fuel costs for an electric vehicle"

Follow this link to a PDF file that explains exactly how an eGallon is calculated.

Hat tip to Joan! via BMW i3 Facebook Group