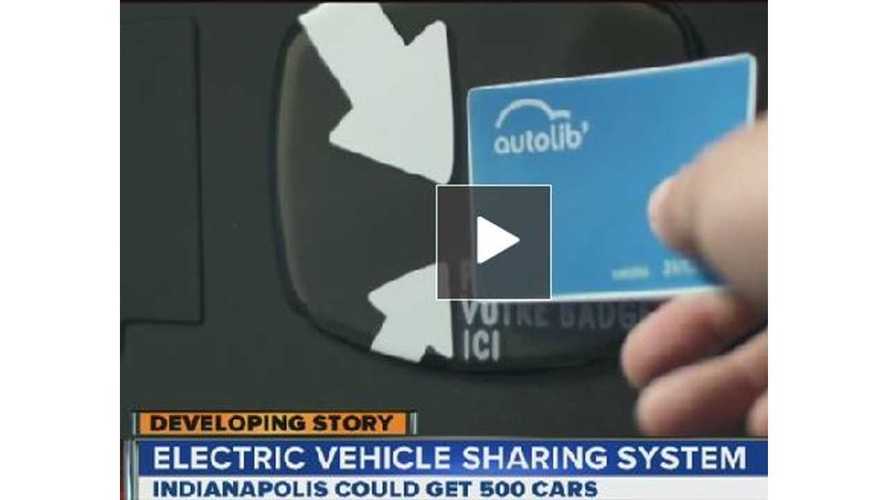 Autolib, the mildly successful electric vehicle sharing program in Paris, France (soon Lyon, France, too) looks to be headed to US and will land here first in the unexpected city of Indianapolis, IN.

Bollore Bluecars are the Vehicle of Choice for Autolib in France

The specifics of the deal to bring Autolib here are not well known at this time, but it seems the electric vehicle sharing program will be functional in Indianapolis sometime in 2014.

By that time, the city expects to have up 500 electric vehicles available in its vehicle-sharing fleet and some 1,200 charge points for subscribers to use throughout the city.

"This is going to help companies and government and people who don't necessarily want a second car or don't even need a first car to be able to take short one-way trips to some of the key destinations in our city."

Apparently, the execs in charge of Autolib had been considering an expansion for some time now and choose Indianapolis shortly after Mayor Ballard stated that the city's goal is to convert its entire municipal fleet over to electric by 2025.

It's believed that Autolib may eventually expand into other US cities, but for now the only one on the list is Indianapolis.

Reports say that Autolib will invest something like $35 million to get the EV sharing program up and running.  100 new jobs are expected to be created and the influx of electric vehicles, as well as all those chargers, will likely transform Indianapolis into the US' EV capital, so to say.

INDIANAPOLIS, Ind. - Mayor Greg Ballard, Bolloré Group, and leaders from Indianapolis' largest employers, universities, hospitality destinations and civic organizations today announced that Indianapolis has been selected as the site of the largest electric car share program in the United States. Bolloré Group plans to invest approximately $35 million to launch an all-electric car share program in the city next year. The system will feature 500 electric vehicles and 1,200 charging stations at 200 car-share locations. The move marks the first time Bolloré will replicate the success of its Paris car share program outside of France.

"This program provides a great opportunity for downtown workers, residents and visitors to get around town in a car without owning one," said Mayor Ballard. “This service allows a person, government or company to only pay for a car when they need and want it. They aren’t paying for fuel, insurance, maintenance and parking costs when the vehicle is not in use.”

The yet-to-be-named Indianapolis car share program is modeled after Bolloré’s popular Autolib’ service in Paris which features over 1,700 electric vehicles, 4,200 charging stations, and 37,000 members. As in Paris, the Indianapolis service is aimed at providing new mobility options to the public. It will also allow Indianapolis to become one of the most “electrified” cities in the US with a dense network of charging stations available to private EV owners.

"We are delighted to announce the launch of the Indianapolis service," said Vincent Bolloré, Chairman of the Bolloré Group. "The success of the Autolib’ in Paris - based on convenience, reliability and availability - has exceeded our expectations and realized our goal of transforming habits of car ownership, reducing pollution and relieving traffic congestions. As a leader in the Smart Grid, we support Mayor Ballard's commitment to Electric Vehicles and are excited to help speed the adoption of EVs in Indiana. The dynamic environment fostered by Mayor Ballard's administration along with the vibrant business and higher education community, and impressive downtown development projects are key factors in our selection of Indy for this first US launch."

HOW IT WORKS: The program is based around short one-way rentals, unlike some other US models which require the user to return to the vehicle where they rented it. Users pay a membership fee (daily, monthly, or annually) and receive an RFID card. When they wish to rent a vehicle they reserve a car on-line or at a dedicated car share kiosk, they unlock the car charger with their card, and then swipe the card on the windshield, which unlocks the car and allows them to drive off. The in-car GPS allows the user to reserve a parking spot with a charging station near their destination. Once they arrive, plug-in the vehicle and the transaction is complete. The user can then reserve another vehicle for their next trip, as needed. The rates for the Indianapolis service have not yet been established, but in Paris, membership costs $16 per month and a 20-minute trip costs about $4.50.

"This announcement is extremely exciting for our city," said President Maggie A. Lewis, Indianapolis City-County Council. "This is a unique opportunity for our residents and visitors and will enhance our efforts in building a world-class city."

Business/Governmental Car-Share: The car share program will be available to individual members and government/corporate users. The City of Indianapolis and many other governmental and business organizations are looking into corporate memberships in order to reduce the size of their vehicle fleet.

"Indianapolis is becoming a major hub for clean transportation technologies, garnering national attention, due in large part to Mayor Ballard's leadership in promoting electric and natural gas fuel in transportation," said Paul Mitchell, President/CEO of Energy Systems Network. "The fact that a company like Bolloré is choosing Indianapolis as the first US market for its innovative transportation solution shows the world is also now taking notice."

Bolloré will begin hiring local management and marketing teams in the next few months. The service is aimed to be a public service and Bollore will work closely with the city in the planning phase and continue discussions with key transportation, neighborhood, business and tourism groups to identify car share locations and other service aspects. The city will assist Bolloré to identify the car share locations, reserve on-street parking where necessary, and enforce reserved parking restrictions with its partners at Park Indy. The company expects to launch the car share service next spring.

Founded in 1822, the Bolloré Group has a diverse portfolio of activities around the world, with leadership positions in Transportation and Logistics, Communication and Media, Electricity Storage and Solutions. The Bollore Group employs over 38,000 people worldwide and had 2012 revenues in excess of $13 billion.

Source: The City of Indianapolis

Green Lamborghini Blocking EV Charging Point Gets Busted By Cop On eBike
Tesla Model Y 70 MPH Highway Range Test: How Far Did It Go?
Tesla Model 3’s Main Rival, The Polestar 2 Reviewed In The UK
This Guy Traded In His Wife's Tesla Model 3 For A Fiat 500e: Really?
Tesla Model Y: Comprehensive Review | Does It Live Up To All The Hype?

Green Lamborghini Blocking EV Charging Point Gets Busted By Cop On eBike
Tesla Model Y 70 MPH Highway Range Test: How Far Did It Go?
Tesla Model 3’s Main Rival, The Polestar 2 Reviewed In The UK
This Guy Traded In His Wife's Tesla Model 3 For A Fiat 500e: Really?
Tesla Model Y: Comprehensive Review | Does It Live Up To All The Hype?