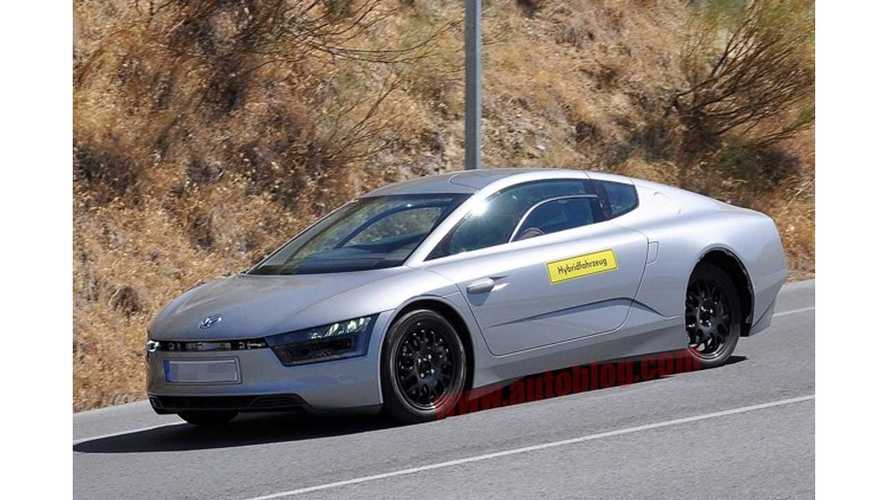 Recently, Automobile magazine put the ultra-frugal Volkswagen XL1 diesel plug-in hybrid through its paces.  With no real effort to conserve fuel, the 264-pound test driver managed a real-world figure of 120 miles per gallon.

Impressive?  We'd say so, but there are some who say that's way short of VW's 261 mpg claim.  That may be partly true, but VW's figure is listed under the European tests cycle and would only ever be achieved under the most ideal of conditions (in other words, near-impossible in the real world).

Still, 120 mpg is spectacular and since the XL1 is so capable of consuming almost no fuel in operation, the folks of VW are now toying with the idea of kicking the standard XL1 up a few notches.

Here's what Automobile magazine had to say on that topic after a long discussion with a "friendly board member" at VW:

"How the XL1 might morph into the spicier XR1."

"The 261-mpg XL1 is too high-priced and too low-volume for Volkswagen to federalize it for U.S. sale, but a sports car based on the same structure might just make it here -- if it gets built at all."

"The XR1 is conceived as a high-tech, carbon-fiber sports car that would offer Porsche 911 performance (and hybrid fuel economy) for half the money. To hit that price target, VW would need to use a parts-bin engine. Fortunately, the company has very well-stocked shelves. Potential engines include the seventh-generation GTI's 220-hp, 2.0-liter turbocharged four-banger and a turbo- or supercharged three-cylinder of 1.2 or 1.4 liters."

XL1 With One Gull Wing Open

It's believed that if the XR1 entered production, the plug-in hybrid part of the equation might disappear.  But why?  To save money?  To reduce weight?

We think pairing the XL!'s plug-in hybrid bits with a meaner engine would make for a perfectly acceptable performance machine that still crushes almost all of the competition on the fuel economy front.  And VW has already done all the development work on the plug-in hybrid side, so why ditch that?

Anyways, here's what else that "source" had to say:

"Removing the rear wheelhouse fairings gives the car a more aggressive look.  The wider track yields a sportier, Coke-bottle plan view. The scissor doors work equally well on a fuel miser and on a sports car. The redesigned front and rear will completely change the character of the car. The performance version loses a couple of points in the wind tunnel, but it looks meaner."

Automobile magazine adds this to the mix:

"Although Porsche is part of the VW Group, the target is to beat the 911 for acceleration, top speed, and fuel economy. VW's bean counters must cooperate by approving the groundbreaking two-seater for less than $50,000. The project has not yet been formally approved."

"All this suggests an 1875-pound two-seater that can sprint to 62 mph in less than 4.5 seconds, reach a top speed of almost 190 mph, and achieve 70 mpg. The asking price depends on volume at VW's Karmann plant, which is currently geared to assemble 1000 carbon-fiber vehicles per year."

Again, we see this as still being a plug-in hybrid.  Why?  Well, there's 2 reasons actually.  There's no version of VW's 2.0-liter turbo engine that offers anywhere near Porsche 911 performance on its own and, secondly, 70 mpg, even in an ultra-lightweight vehicle, seems impossible to achieve without a battery lurking somewhere within.

That's our take on the XR1, which is still only someone's pipe dream at this point in time, but if it keeps the plug and makes it to production at a price that's projected to be way below the  XL1's estimated $80,000-ish, then we'd be willing to get on that waiting list.  How 'bout you?