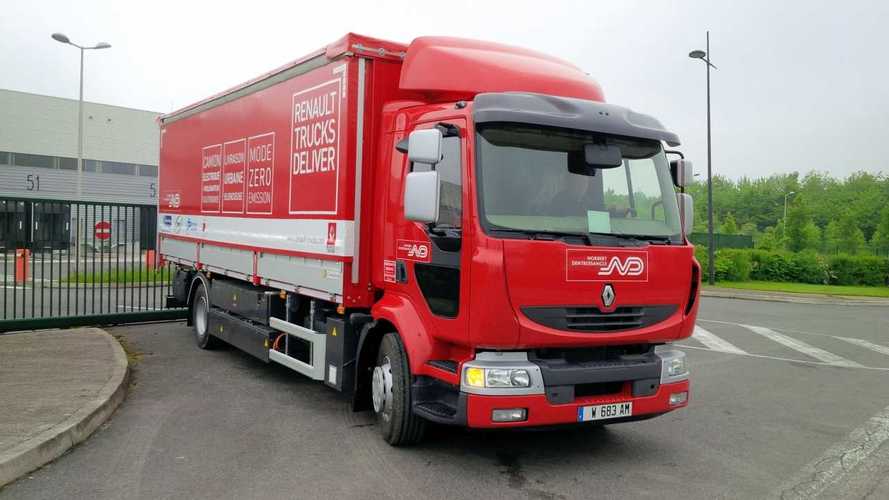 This 16 ton vehicle with a 6.5 ton payload capacity is built around a Midlum chassis.

This semi is capable of doing up 37 miles in all-electric mode (similar to Volt, but this is series hybrid drivetrain).  If needed, the diesel engine, combined with 70 kW generator, provides up to 250 miles of total range.

This truck is equipped with 103 kW asynchronous motor and an 85-kWh LiFePO4 battery pack.  Batteries can be fully recharged in four hours using a 380 V, 64 A three phase supply.

The vehicle will be tested between June 2013 and January 2014 in the Paris region on behalf of ThyssenKrupp Materials France.

Per the press release:

"This Midlum electric with autonomy extender will be operated by Norbert Dentressangle on behalf of ThyssenKrupp Materials France in the Paris region. Offering a payload of 6 t, it will be devoted to carrying steel bars between 3 and 7 m long, or palettes of small format steel, as well as shee t steel between 1 and 3 m long. It will carry out its assignments between 5 AM and 2 PM, covering a daily distance of between 170 and 220 km in the north - west of the lÎle -de-France region supplying some 20 of ThyssenKrupp Materials France's customers."

"This project seemed to us as an opportunity to prepare for the future. All the more so since our head office is in the Paris region where congestion and pollution are higher."

Interesting here is that several on-board energy management modes are available and that the driver can choose between the two following modes in real time:

Automatic:  This is the default operating mode: the hybrid calculator automatically manages the battery charge by starting and stopping the autonomy extender. It constantly optimises electrical and internal combustion energy management to reduce the overall consumption by as much as possible. To obtain the best combination o f the two energies, the hybrid calculator uses the data relating to the delivery round and any "zero emission" zones on the route which will already have been entered into the hybrid calculator.

Manual:  The driver can activate the all-electric mode at any time, particularly for deliveries in controlled or "zero emission" areas. In this case, the autonomy extender will not operate as long as there is a minimum amount of energy in the batteries.