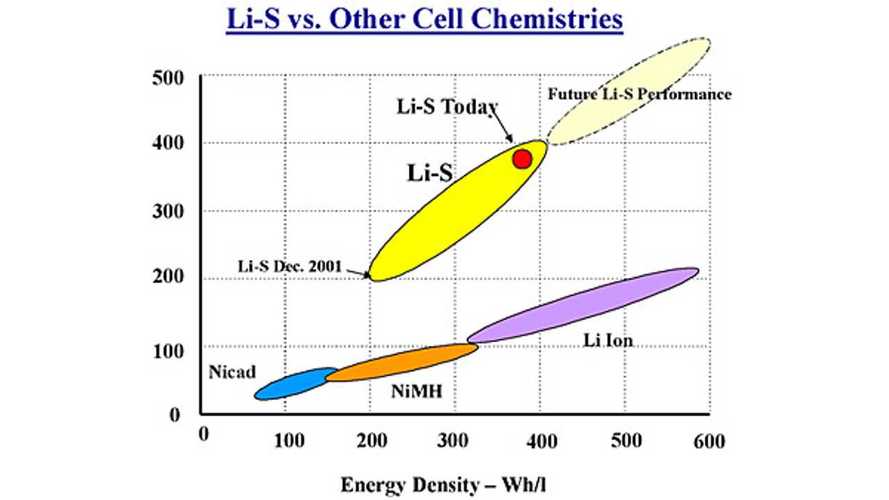 We all know that, in theory, lithium-sulfur is an energy-dense beast.  Theoretically, lithium-sulfur has the potential to be four times as energy dense as today's lithium-ion batteries, but that's all in theory and, until a working example is demonstrated, we're all left dreaming.

However, the steps made by ORNL show true promise.  Remember, there have been some breakthroughs related to extended the longevity of lithium-sulfur, but the problem with the liquid electrolyte breaking down the battery over time still remains with this chemistry.

ORNL's lithium-sulfur battery does away with the conventional liquid electrolyte in favor of solid electrolyte material.  As Green Car Congress says:

"The ORNL team overcame these barriers by first synthesizing a new class of sulfur-rich materials—lithium polysulfidophosphates (LPSPs)—that conduct ions as well as the lithium metal oxides conventionally used in the battery’s cathode."

"LPSPs have ionic conductivities of 3.0×10−5 S cm−1 at 25 °C, which is 8 orders of magnitude higher than that of Li2S (lithium sulfide). The high lithium ion conductivity imparts excellent cycling performance, the researchers noted."

"The researchers then combined the new sulfur-rich cathode and a lithium anode with a solid electrolyte material, also developed at ORNL, to create an energy-dense, all-solid battery."

And here's an excerpt from ORNL's research paper, which was published in Angewandte Chemie International Edition:

"Our approach is a complete change from the current battery concept of two electrodes joined by a liquid electrolyte, which has been used over the last 150 to 200 years. This game-changing shift from liquid to solid electrolytes eliminates the problem of sulfur dissolution and enables us to deliver on the promise of lithium-sulfur batteries. Our battery design has real potential to reduce cost, increase energy density and improve safety compared with existing lithium-ion technologies."

Now for some of the gritty technical details, presented by Green Car Congress:

"The new ionically-conductive cathode enabled the ORNL battery to maintain a capacity of 1,200 mAh/ g after 300 charge-discharge cycles at 60 °C. By comparison, a conventional lithium-ion battery cathode has an average capacity between 140-170 mAh/g. Because lithium-sulfur batteries deliver about half the voltage of lithium-ion versions, this eight-fold increase in capacity demonstrated in the ORNL battery cathode translates into four times the gravimetric energy density of lithium-ion technologies."

Most importantly, though, is that the inclusive of solid electrolyte materials makes the battery inherently safer than ones that use a liquid.

ORNL's potential breakthrough lithium-sulfur battery is still in the demonstration/development phase.  Commercialization is tentatively set for...quickly.   Actually, there's no set timeline for commercialization, but a patent is at least pending for ORNL's design.