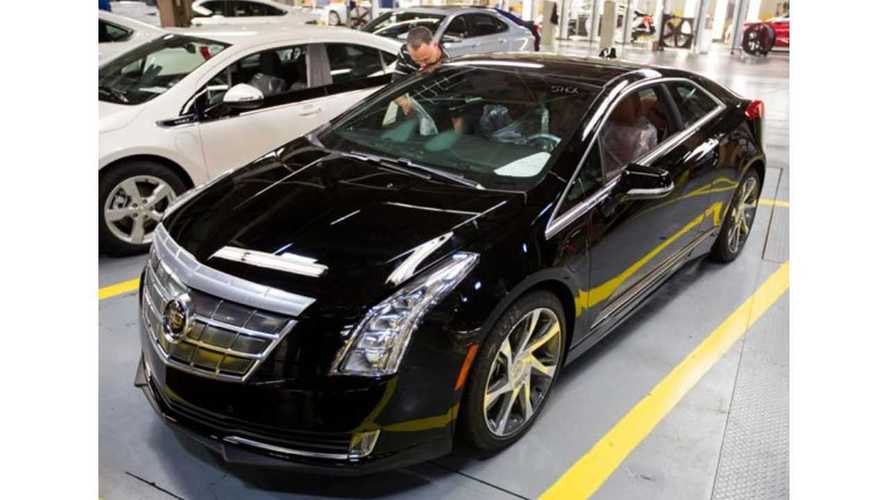 These current ELRs will not be available to the public, but instead are used to fine tune the manufacturing process alongside production of the Chevrolet Volt, which are currently running down the Michigan line.

Official production of consumer cars start in late 2013, with the first of the "limited run" of luxury extended range Cadillac being delivered in the first quarter of 2014, but only through select Cadillac dealers.

Pricing is expected to start in the mid-$60,000 dollar range.

These shots were made available as GM invited both their Chevrolet and Cadillac racing cars drivers to the Hamtramck facility on Wednesday, May 29th, 2013 to witness the first ELR rolling off the assembly line.

The Cadillac ELR shares many features with the Chevrolet Volt, as they are based off the same platform.

Shot Of the First ELR (via AOL Autos)

Both with feature GM's 1.4 Ecotec four-cylinder engine and the upgraded for 2013, 16.5 kWh lithium battery pack.  However, the Cadillac version is tuned for a little more power out of the electric drive unit.

These improvements will shave about a second off the Caddy's 0-60 time, estimated at just under 8 seconds, and also improve the driving response at highway speeds.

Overall, the Cadillac will get about 35 miles per charge (3 less than the Volt), and a "full driving range exceeding 300 miles."  (All the specs on the ELR can be found here)

First ELR Rolls Off The Hamtramck Assembly Line On Wednesday, May 29th, 2013 (via AoL Autos)