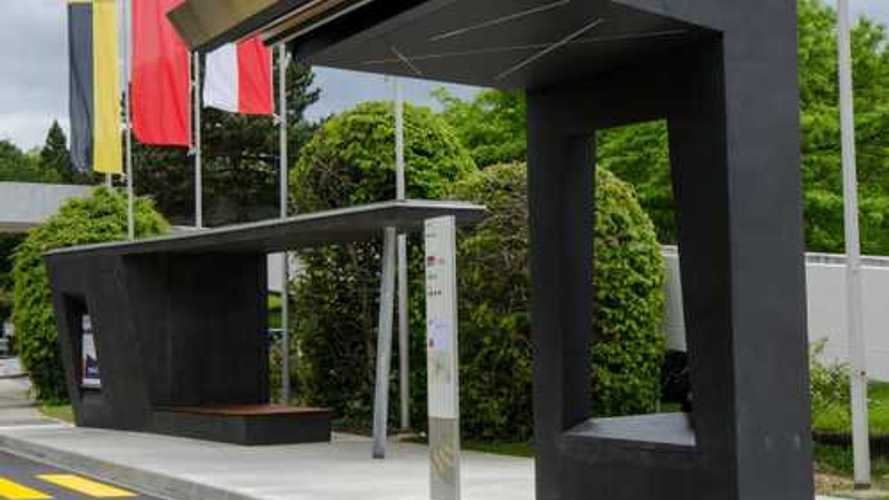 Designed by ABB Sécheron in cooperation with Geneva Public Transport (TPG), clean energy provider Services Industriels de Genève (SIG) and coordinated by the Office for Promotion of Industry and Technology (OPI), the TOSA transports passengers from the airport to the Palexpo exhibition center, a distance of less than one mile.

That's certainly nothing to brag about, but what's brag-worthy here is that TOSA will "flash charge" in only 15 seconds.

TOSA makes use of a tiny battery pack that relies heavily on its ability to recharge at an incredibly rapid rate.

The 19-meter long TOSA can carrying as many as 135 passengers, and uses a pantograph-style (overhead and extending out over the bus) charger.

The charger connects to the stopped bus in just one second and then sends the juice at a rate of 400 kW.  In less than 15 seconds, TOSA is ready for its brief trip over the next 3-4 stops. To not disturb the electricity network, the flash stations are connected to the 50 kVA and power is provided by 3 kWh supercaps.

At the end of the bus line, TOSA charges fully for 3-4 minutes, but throughout the day it operates mainly off of those 15 second charges. We're guessing that (if full charge is done at full power) TOSA's battery capacity in somewhere in the range of 20-25 kWh, which is roughly LEAF-sized. Alternatively (if end-stop charging is going in at 50 kW) it could be only a few kWh of supercapcitors as well.

ABB says that even when charged this rapidly, the pack in TOSA is capable of lasting for 10 years.

Work on TOSA began some 22 months ago and the goal of this prototype test is to show that this is a viable option compared to conventional long range buses or even BYD-like electric buses with massive battery packs.

Enjoy a plethora of images and some videos below.