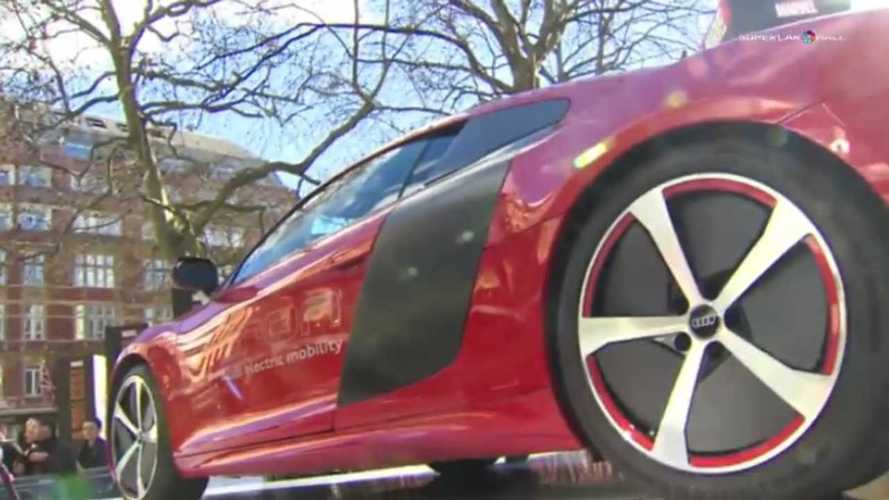 What is worse than having your favorite electric car get cancelled ahead of production?  How about dying twice?

What Could Have Been. The Audi R8 e-tron Maybe Takes Its Final Lap

In the on again, off again world of the Audi e-tron, the German automaker confirmed to Autocar that it currently has no plans to sell its all electric sports cars.

The skeptic in us questions whether it was ever headed to production during this second revival.

It is curious to note the car's recent public resurgence, along with hints of its upcoming production from Audi hit an all time high just as the electric version of the car was prominently featured in the hit move franchise Iron Man.

Now that the movie has almost run its course, the electric e-tron seems to have taken a back seat to a renewed marketing push to sell the new 2014 model year standard combustion version of the uber-car.

Below: Video of Audi's latest R8 commercial...still with Iron Man, but less e-tron

Audi says that 10 R8 e-trons had been built for the film, testing/development and promotion, but they are going to stay internal to the company, as it hopes to leverage what they have learned for future models.

"Through the R8 e-tron, Audi has acquired extensive expertise that will benefit its electrified production models." - Audi statement

Only 10 Audi R8 e-trons Were Made, None Will Be Sold To The Public

Autocar postulates that Audi is not offering the R8 e-tron to customers "because battery technology hasn't advanced as fast as Audi expected," and "consequently the cost of the batteries has not fallen as much as the company forecast, making the R8 e-tron unviable for series production."

Given the car could only muster a range of about 130 miles, while also being capable of hitting 60 mph in 4 seconds via a 375 hp/604 lb-ft motor; those two figutres would tend to support that fact that today's lithium battery technology doesn't offer enough energy density to be adequately shoe-horned into the Audi R8 e-tron, especially with  customers now expecting Tesla Model S-like range figures.