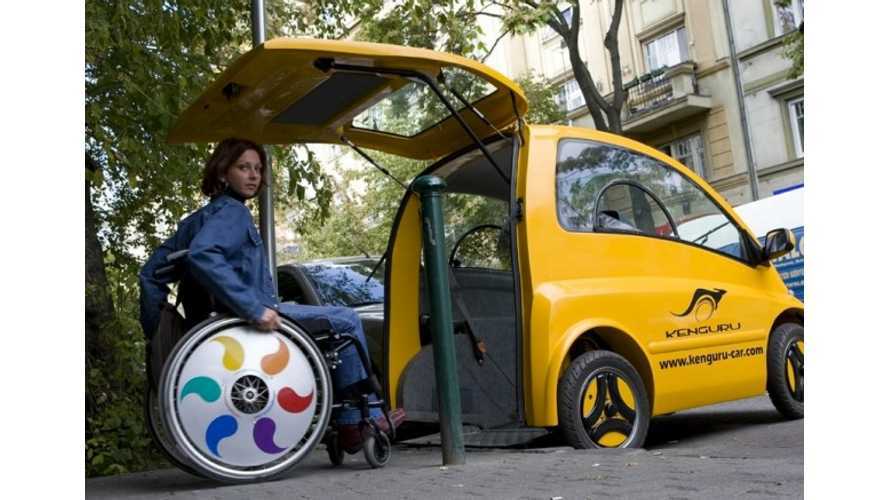 Two Kengurus Are So Much Better Than One

Zoern, a wheelchair-bound individual who hasn't driven an automobile since her college days, hit the Internet a few years ago in search of something that was wheelchair-accessible and easy to operate.  Her search led her to the relatively unknown Kenguru.

Kenguru, a Budapest-based automaker who advertised a small electric vehicle that was the ultimate in terms of wheelchair-accessibility, was struggling to survive.

This Kenguru vehicle was so remarkable—it does, after all, allow wheelchair users to enter and drive without existing the wheelchair—that Zoern, an Austin, TX resident, had to have one no matter what the cost.

"It basically extends the range of a wheelchair. Me, I can go maybe a mile in my chair out in the elements. Now I can go 20 miles and be protected from the rain and the sun.  It's not a car — it's an expansion of your independence."

However, Kenguru's electric vehicle was stuck in the prototype phase due to some financial difficulties.  Zoern decided to contact Kenguru owner Istvan Kissaroslaki.

"I was on my way home from work when she called, and we spoke for 45 minutes.  I would normally have told her, ‘Get in line.' We had just lost all our bank financing, 2 million euros, after the collapse of Lehman Brothers. I told her to call me back in about four years."

But Zoern didn't give up.  Zoern immediately contacted a partner at her law firm who both then contacted Kissaroslaki to find out how much money it would take to keep Kenguru afloat.

As Zoern says of the phone call:

"He actually started laughing because I'm this crazy girl in Texas that doesn't have any money and he needs $3 million.  So that was kind of the beginning of our relationship."

Kissaroslaki, in seeking investors, eventually found his way to Texas.  He and Zoern met again on several occasions before deciding to move the Kenguru brand to Austin, Texas and to set up a company there called Community Cars.  Only 8 employees work there, but progress has been made.  It's now believed that the Kenguru electric vehicle seen on this page will enter limited production later this year.  They're expected to cost $25,000, but for Zoern and others with restricted mobility, paying that amount for freedom to move about is a no-brainer.

Yes, that $3 million was raised, though it took quite some time.  Other struggles were overcome along the way, too.  But now, Kenguru is just months from reality as VectorWorks Marine in Florida is set to begin production on the vehicles by July 15.  The first batch of vehicles will go on sale by the end of summer.

The Kengura electric only goes 25 miles per hour, but for those bound to a wheelchair, that's like ten times faster than they can currently travel.

Fine for Men Too

As for production, Zoern says they hope to put out around 100 Kengurus this year, but will eventually crank that annual figure up to 3,000 units.  Existing pre-orders sit at 600 units, but Zoern says the skies the limit.  According to Zoern, even 3,000 Kengurus per year might not keep pace with demand.

"I have a feeling that the demand is going to require a lot more than that.  But time will tell."

So, that's the story of how one individual, Zoern, almost single-handedly saved an automaker.