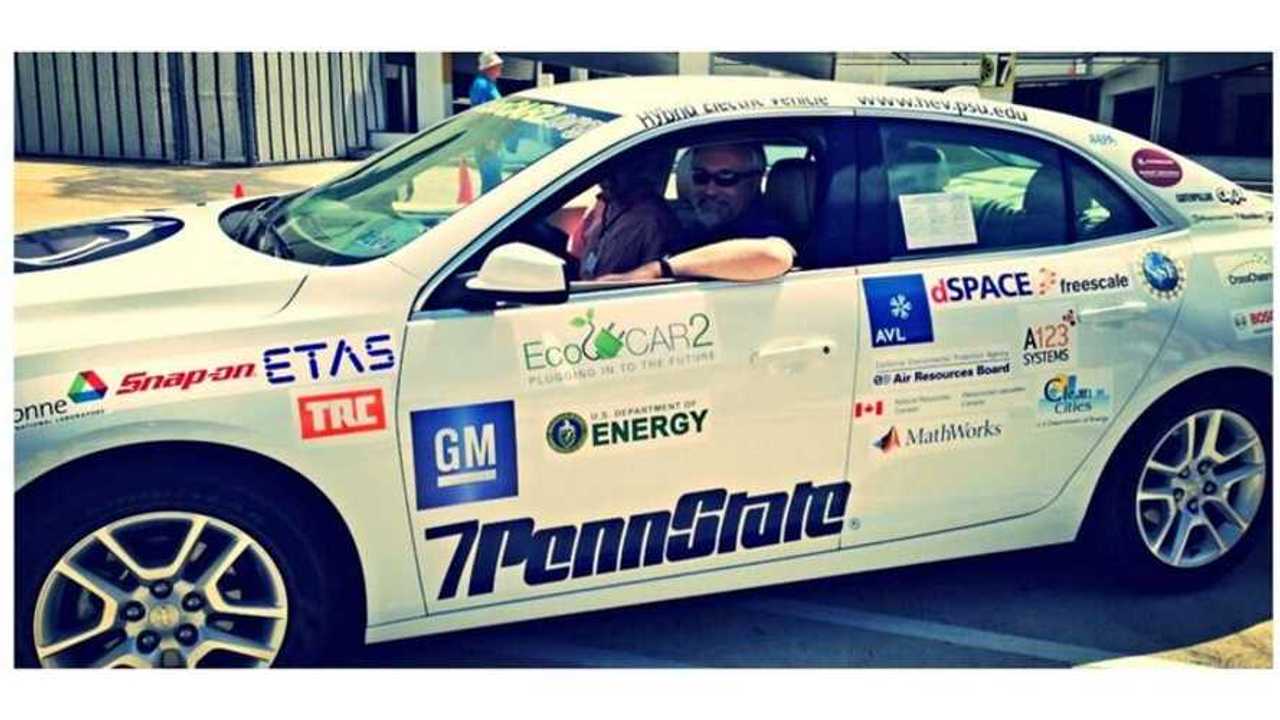 Out of the 15 universities competing in the 3-year-long EcoCAR 2 challenge, only one can be named the victor of year 2.  That honor went to the Penn State University Advanced Vehicle Team (PSU AVT).

EcoCAR 2 was in in Yuma, Arizona last week for 6 days of evaluation at 'General Motors Desert Proving Ground. From there, the competition moved to San Diego for judging by automotive industry experts.  PSU was selected as the year-2 winner, but there's still one more year left in the competition.

In case you're not familiar with EcoCAR 2, all participants were given a 2013 Chevrolet Malibu for conversion.  Though the starting vehicle is identical for all 15 of the competing universities, the path of conversion is freely chosen,  the technical goals include:

"The  designed a series plug-in hybrid electric vehicle (PHEV) fueled with E85. The converted 2013 Chevrolet Malibu uses a front-wheel-drive system powered by a Magna E-Drive motor with a 90 kW electric drive unit to supply the propulsion for the converted Malibu. For the auxiliary power unit, the PSU AVT uses a Weber MPE 750 engine fueled with E85, coupled to a UQM PowerPhase 75 generator to supply DC power to the high-voltage bus. The vehicle uses lithium-ion-phosphate batteries to form the basis for the energy storage system."

Argonne National Laboratory and GM engineers subjected the 15 competing vehicles to "extensive safety inspections and on-road evaluations, similar to those conducted on new GM vehicles."  Furthermore, each vehicle was "evaluated on reduced fuel consumption and greenhouse gas emissions as well as performance, utility and safety."

PSU was chosen the winner by impressing judges with its E85 plug-in hybrid electric vehicle.  Additionally, the team was the "first to pass safety and technical inspections, on-road safety evaluation as well as run all the competition dynamic events."

The next step, year 3, is to perfect the vehicles before heading to Washington, D.C. in May 2014 for final judging.