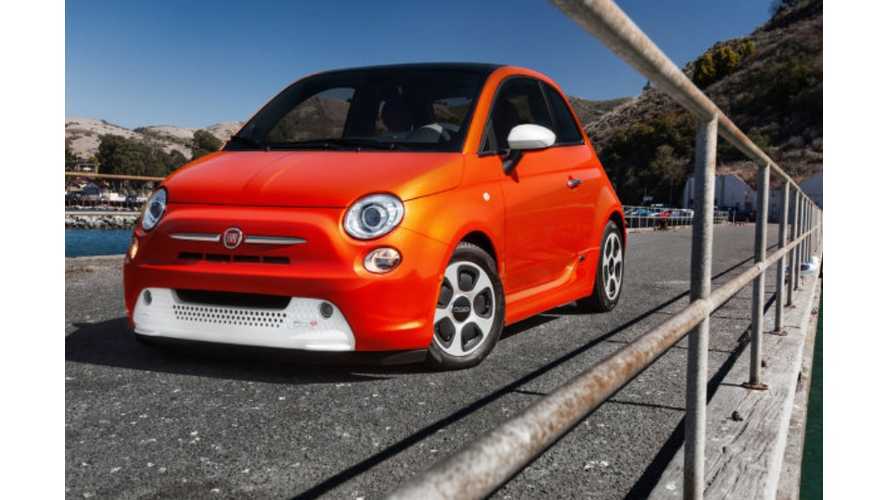 The praise for the electric Fiat 500e keeps pouring in.  It's still fresh in our minds that Consumer Reports called it a hoot to drive.  That, perhaps, was a bit unexpected, but this here news is even more so: Top Gear fell head-over-heels in love with the spunky 500e.

Here are a few choice selections from Top Gear's glowing review of the 500e:

How far can it go on a charge - and I mean really go, not what the brochure says?

"Good question. Fiat reckons it'll do 87 miles on a single charge, but that doesn't factor in the amount of energy the car can recover while braking. On the test route we drove the range went up and down depending on the road speed and geography - the car calculates range based on current and recent past driving patterns. But by the time we had finished the hilly 50-mile there was still around half of the charge left. So say nearer 100."

That's enough of the technical stuff, what's it like to drive?

"Excellent. Other than the Abarth models, this has to be the pick of the 500 pack. It might weigh 600lb more than a standard petrol 500, but Fiat has distributed the weight so well, you don't notice it much. The 500e is now 57:43 front/rear instead of the petrol cars' 64:36, and it feels like it. Combined with the 200Nm available from 0 (zero) revs and no gears to bother with, this is one of the all-time best city cars ever made."

Really? It's that good?

"Yep. There's just nothing to worry about other than having fun. And maybe where the next charge is coming from. Even the brakes feel like regular brakes, even though, above 8mph, it's all done by regeneration, not using the discs."

Unfortunately, as Top Gear points out and most of us already know, the Fiat 500e is a California-only offering at this point in time.  But with all the glowing reviews out there and a lease price of only $199 per month, we sure do think this "one of the all-time best city cars ever made" should, well, be made for all to enjoy.  Fingers crossed on this one.