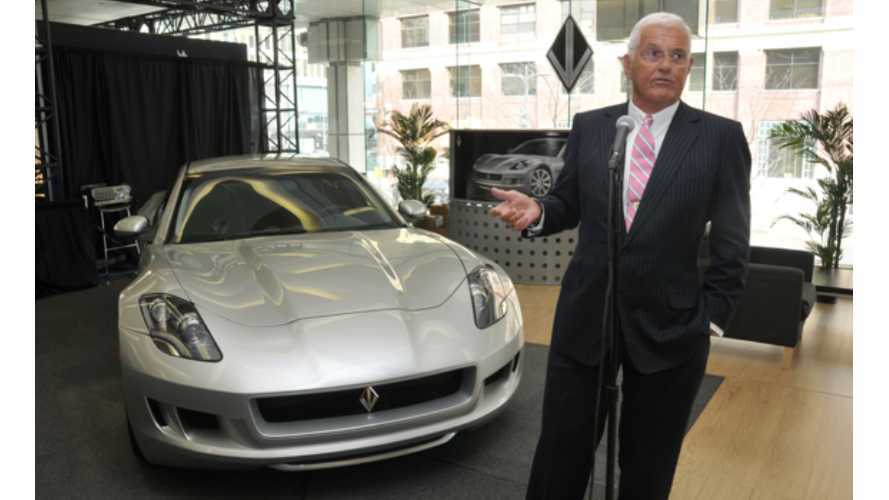 Reuters is reporting that Bob Lutz, who is the "L" in VL Automotive, and Chinese part giant Wanxiang, who previously bought out bankrupt battery maker A123, and just 4 months ago sought to aid Fisker in staying viable, are teaming up in a bid to takeover Fisker Automotive.

Update:  The amount of the bid is now known: $21 million ... just a touch under the $1.2 in private capital the company raised in order to build up the company

Mr. Lutz's interest would be in gaining access to the Fisker Karma's glider program in order to produce his not so green Corvette ZR1- powered 638 hp 6.2L Destino.

"I want Fisker to live and succeed, if only to ensure a continuing supply of Karma bodies for my and my parter’s VL Destino..." said the 'father of the Chevy Volt' only three weeks ago while reflecting on Fisker's future.

We assume that Wanxiang looks to cash in on maximum Bob's name and brand equity, as well as exploring the possibility of getting the DoE to ease up (and/or cut a deal) on the restrictions put on Fisker via their still outstanding ATVML loan (now estimated at around $170+ million); that previously caused both Geely (parent of Volvo) and Dongfeng to run for the nearest exit after exploring takeovers of the California start-up with the US government.

Sources tells Reuters that the duo are likely looking to avoid the hassle of US loan covenants by gaining control of Fisker through a prepackaged bankruptcy plan; a likely inevitability of the company in the very short term.  These sources, who wish to be kept anonymous because the talks are private, warn that a deal is still far from assured.

The First Of About 2,500 Fisker Karmas Built Rolls Of Valmet Automotive Assembly Line in Finland In 2011

Fisker Automotive has not built a car since July of 2012 has laid off all but a skeleton crew of employees.

Since that time the company has also suffered through the high profile loss of its founder, Henrik Fisker, the loss of 338 Karmas in a hurricane (that their insurance company refused to come 100% good for), faces eviction from its headquarters, as well as lawsuits from both its website provider and a federal lawsuit on how it has treated their employees, and has seen 2/3rds of their cash reserve vanish via a raid by the federal government.

Separately according to Reuters, there is also a "push by investors in Europe and Hong Kong, including billionaire Richard Li, to buy out the U.S. Department of Energy's position in Fisker" at a significant discount, then resell the assets back to other interested parties at a discount.

In either scenario, it is likely time for the DoE to realize their remaining investment in Fisker is not coming back to them, and to cut the best deal they can, while they can.  And in so doing, perhaps letting the Fisker name have a second chance at success, along with preserving a just few more US jobs.