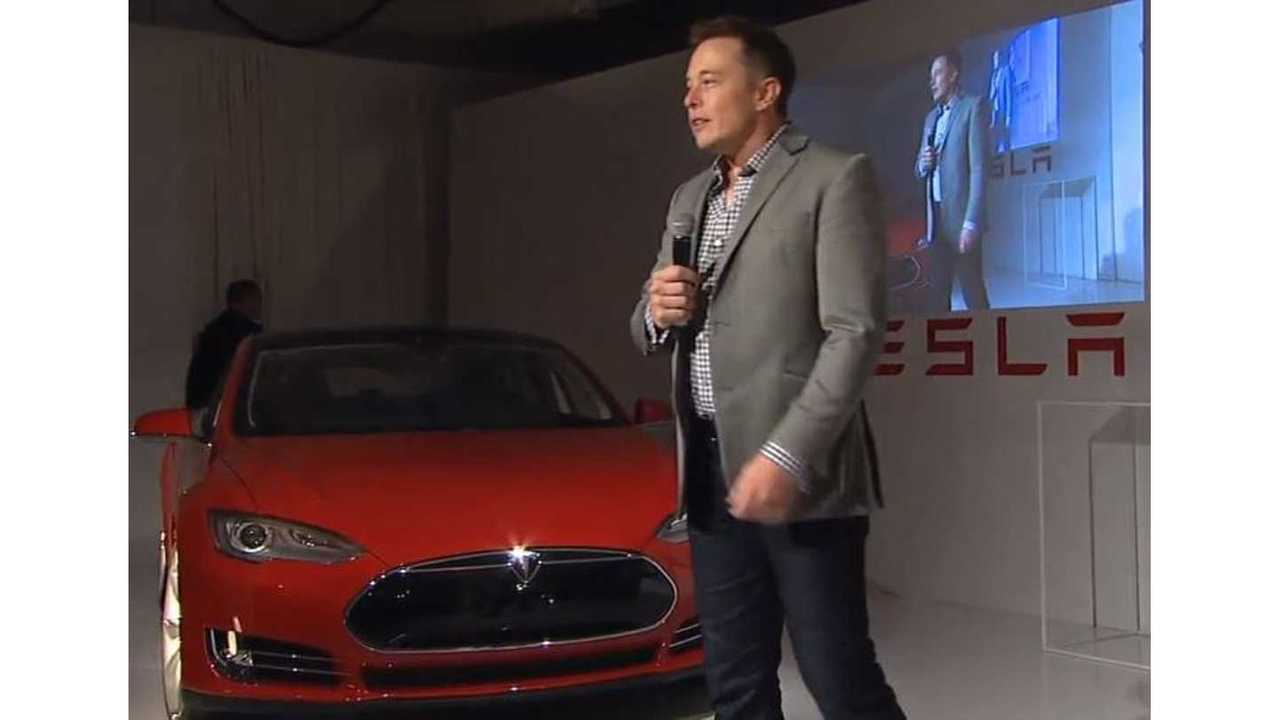 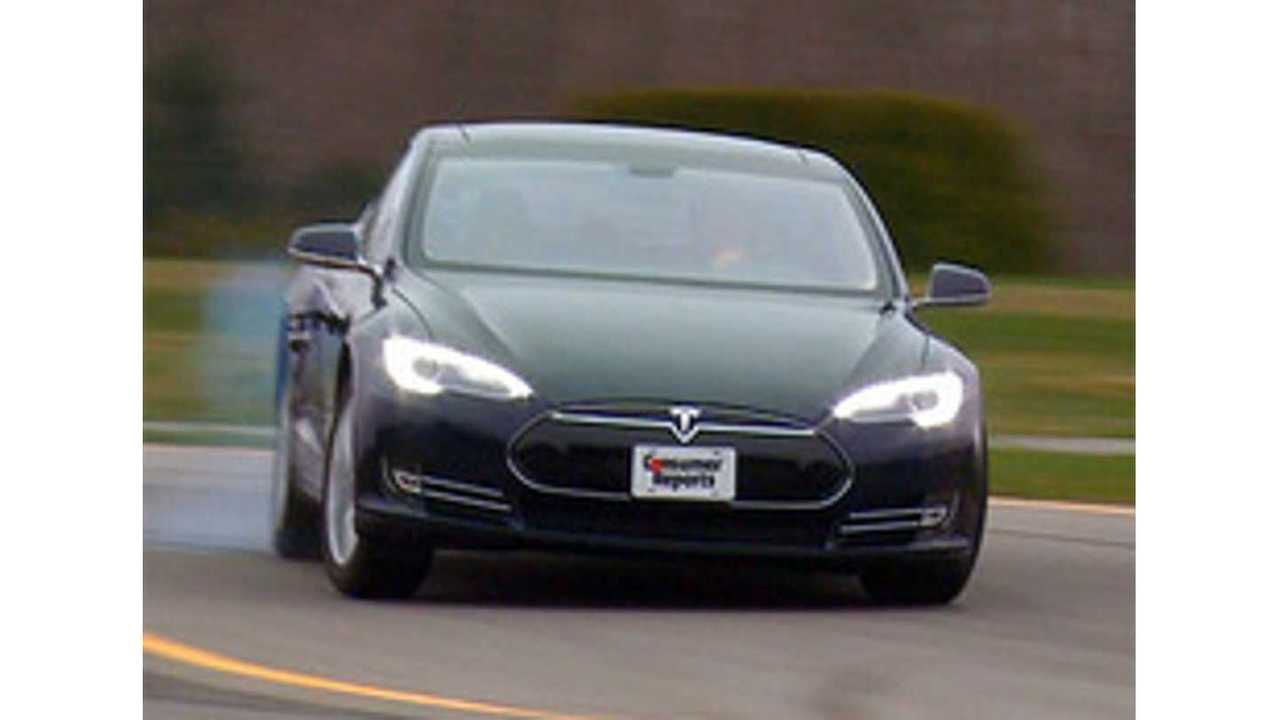 Elon Musk is back at it again on Twitter.

This time the news couldn't be more positive.

According to Musk, Tesla Motors aims to fully repay its DoE loan by tomorrow.

The only downside here is that the Supercharger announcement has been pushed back one more week.

"Given govt loan repayment this week (prob Wed), Supercharger update will be next week." 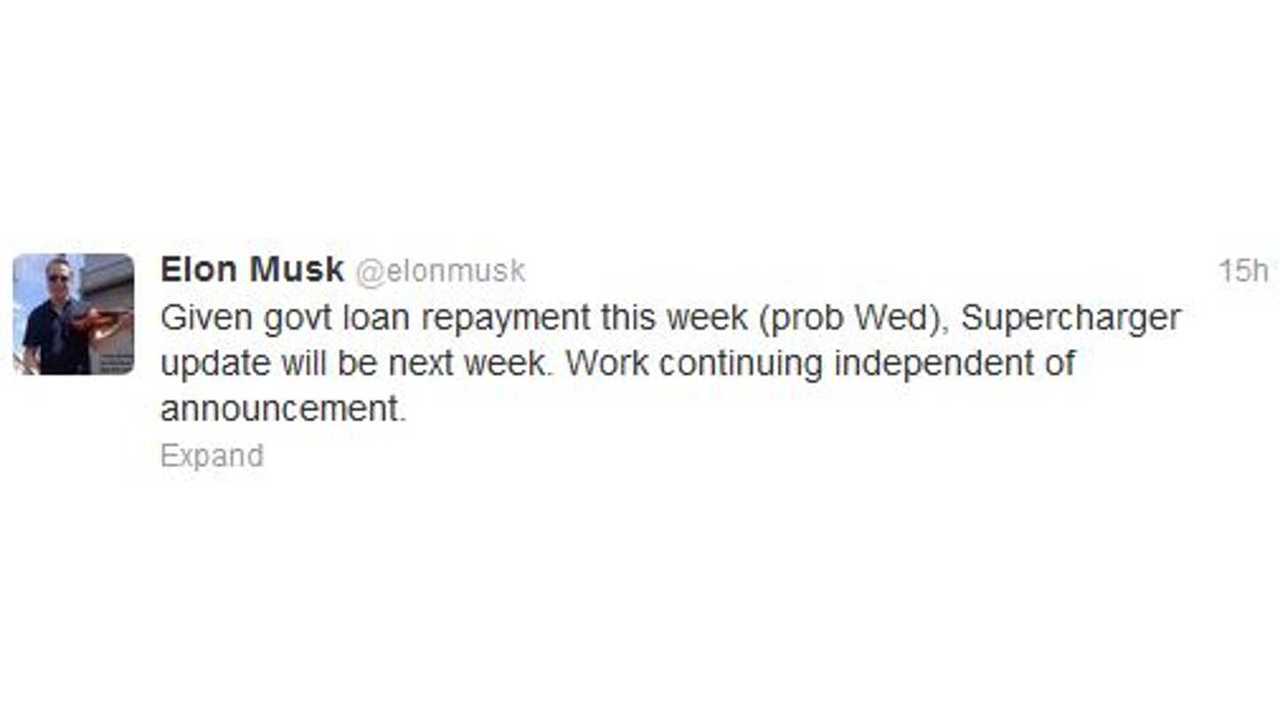 That's the Full Repayment Musk is Referring to Here

According to Automotive News, a "Tesla spokeswoman confirmed that Musk was referring to the full repayment of the DOE loan."

Of course, Tesla is making use of an expanded stock offering to pay off its $452.4 million debt to the DoE, but that matters not to us or anyone else in the automotive kingdom.

If Tesla pays its debt in full, then it'll become independent of the US government.

More impressively, if Tesla does make that payment on Wednesday, then the automaker will have paid off its loan 9 years ahead of schedule.  Yes, that's 9 years!!!

UPDATE:  It's a done deal...See Press Release and Musk Tweet Below  (Adds DoE Comment Further Down Below) 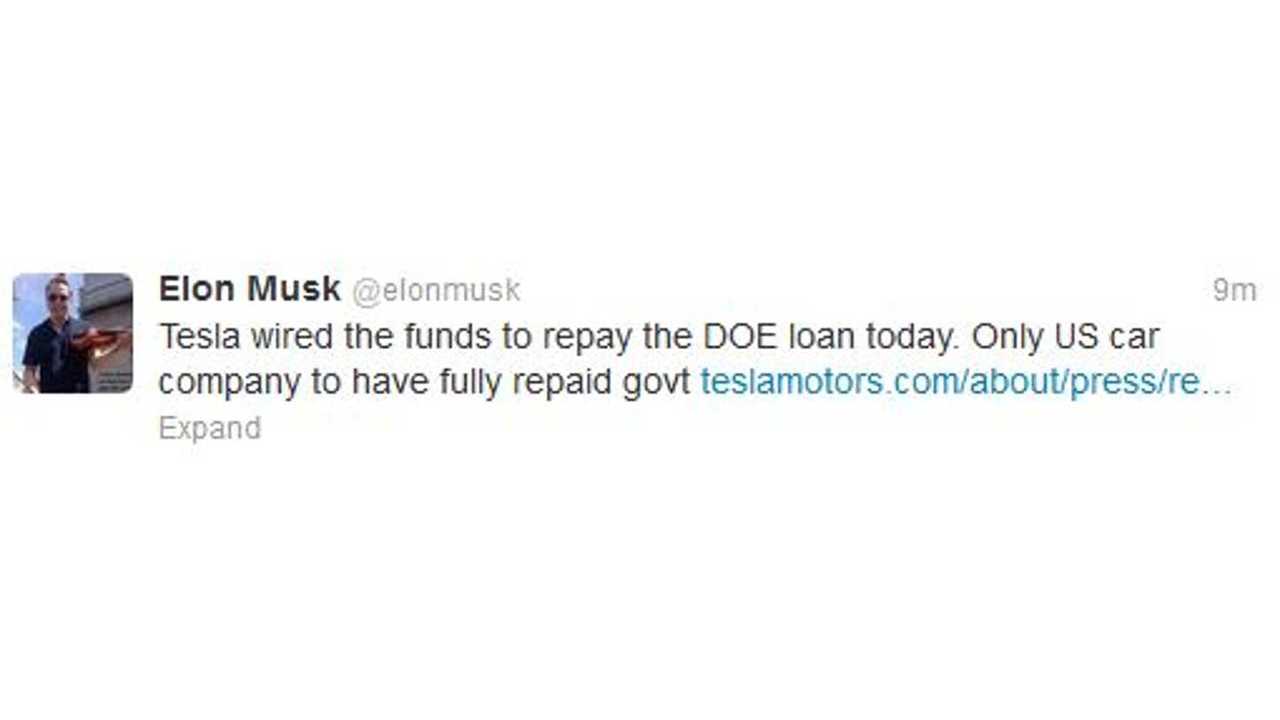 Only American Car Company to Have Paid Back Government

PALO ALTO, Calif.-- Tesla Motors announced that it has paid off the entire loan awarded to the company by the Department of Energy in 2010. In addition to payments made in 2012 and Q1 2013, today’s wire of almost half a billion dollars ($451.8M) repays the full loan facility with interest. Following this payment, Tesla will be the only American car company to have fully repaid the government.

For the first seven years since its founding in 2003, Tesla was funded entirely with private funds, led by Elon Musk. Tesla brought its Roadster sports car to market with a 30% gross margin, designed electric powertrains for Daimler (Mercedes) and had done preliminary design of the Model S all before receiving a government loan.

In 2010, Tesla was awarded a milestone-based loan, requiring matching private capital obtained via public offering, by the DOE as part of the Advanced Technology Vehicle Manufacturing program. This program was signed into law by President Bush in 2008 and then awarded under the Obama administration in the years that followed. This program is often confused with the financial bailouts provided to the then bankrupt GM and Chrysler, who were ineligible for the ATVM program, because a requirement of that program was good financial health.

The loan payment was made today using a portion of the approximately $1 billion in funds raised in last week’s concurrent offerings of common stock and convertible senior notes. Elon Musk, Tesla’s Chief Executive Officer and cofounder, purchased $100 million of common equity, the least secure portion of the offering. “I would like to thank the Department of Energy and the members of Congress and their staffs that worked hard to create the ATVM program, and particularly the American taxpayer from whom these funds originate,” said Elon Musk. “I hope we did you proud.”

“When you’re talking about cutting-edge clean energy technologies, not every investment will succeed -- but today’s repayment is the latest indication that the Energy Department’s portfolio of more than 30 loans is delivering big results for the American economy while costing far less than anticipated.

“More than 90 percent of loan loss reserve Congress established remains intact, while losses to date represent about 2 percent of the overall $34 billion portfolio.  The other 98 percent of the portfolio includes 19 new clean energy power plants that are adding enough solar, wind and geothermal capacity to power a million homes and displace 7 million metric tons of carbon dioxide every year – roughly equal to taking a million cars off the road.

“The Department first offered loans to Tesla and other auto manufacturers in June 2009, when car companies couldn’t get other financing and many people questioned whether the industry would survive.  Today, Tesla employs more than 3,000 American workers and is living proof of the power of American innovation.  This is another important contribution to what the Obama Administration has done to preserve and promote America’s auto industry.

“Finally, this announcement is also good news for the future of America’s growing electric vehicle industry.  While the market has taken longer than predicted to get going, sales of electric vehicles in the U.S. tripled last year and are continuing to increase rapidly in 2013.  Tesla and other U.S. manufacturers are in a strong position to compete for this growing global market.”