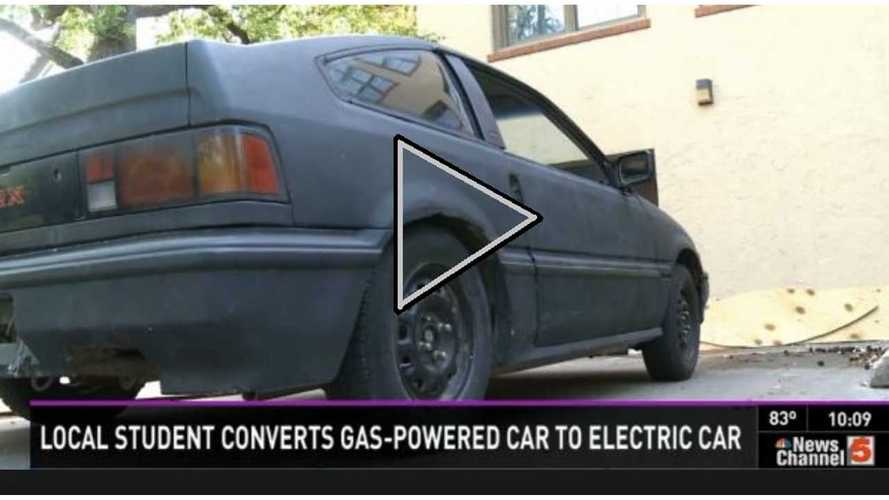 It's hard to forget the high school days.

Even more so when some sort of grand achievement was made.

For Kirk Smith, a senior at John Burroughs School, one of those grand achievements that will likely always be remembered is converting a tired Honda over to electric.

The idea came to Kirk Smith after watching a YouTube conversion video.  But his parents weren't on board.  His father (Dale Smith) didn't want to deal with garaging another vehicle and seemed to even doubt that his son could perform the task.

"I was still not interested because he's too busy and I didn't want it my garage," says Dale Smith.

Eventually, Kirk's father caved in and the search for a donor began.  Kirk located a Honda CRX with 197,000 miles on the odometer.  The price was $600.

After purchasing it, Kirk said the next step was to "Take everything out that you don't need, the engine, the radiator, the exhaust manifold, the whole exhaust line."

The conversion took a "year of trial and error, plus a half a dozen eight volt golf cart batteries."

But the electric CRX took its maiden voyage a couple of weeks ago in the parking lot at John Burroughs School.

Right now, the electric CRX is still a work in progress.  It can't even hit 35 mph at this point in time, but if all the kinks are worked out, then Kirk will take it to the University of Tulsa to study mechanical engineering under full scholarship, likely due to his perfect 36 ACT score.

After that, Kirk hopes to land a job at Tesla Motors, which is the automaker that inspired his conversion.