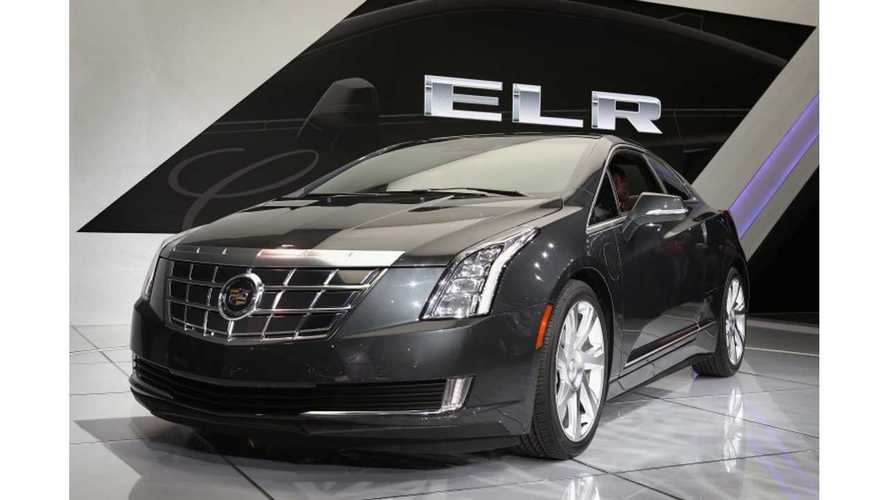 Car and Driver has recently compiled a list of the "25 Cars Worth Waiting For," and because we love lists (and electric cars) we felt we had to pass on one of the auto magazine's choices that we happen to agree with, the Cadillac ELR.

Although we have recently learned that the Cadillac ELR will be a "limited run" extended range vehicle with a fairly steep price-tag; it is that exclusivity, coupled with some aesthetic and performance enhancements over its Volt-based sibling, that we feel will make it one of the most unique plug-in vehicles on the road.

Car & Driver seems fairly impressed with the look of the ELR, and with the fact that the ELR has stayed true to the Cadillac Converj concept that debuted at the 2009 NAIAS show in Detroit (a rarity to be sure), while keeping its distance from the Chevrolet Volt.

"(The ELR) will seem right at home in Caddy showrooms, channeling both the gorgeous CTS coupe and the buttoned-down ATS sedan. Sporty proportions and 20-inch wheels hint at improvements to the Volt's chassis. These include swapping in GM's HiPer anti-torque-steer front struts, adding a Watt's link to the torsion-beam rear suspension, and fitting computer-controlled adaptive dampers."

Most of the rest of the Cadillac ELR remains unchanged from the Volt platform, both with feature GM's 1.4 Ecotec four-cylinder engine and the upgraded for 2013, 16.5 kWh lithium battery back.  However, the way those combine to perform in the real world will be slightly changed, as General Motors figures that Cadillac buyers expect a little more 'oompf' (and two less doors) while they are out for a drive.

The ELR is rated at 154 kW, or 207 horsepower, which is 58 more than is found in the Chevy, and 295 lb-ft of torque, 23 lb-ft more than the Volt.  These improvements will shave about a second off the Caddy's 0-60 time, estimated at just under 8 seconds, and also improve the driving response at highway speeds.   Overall, the Cadillac will get about 35 miles per charge (3 less than the Volt), and around 300 miles of total miles range.  (All the specs on the ELR can be found here)

More than anything else, Car & Driver notes that the ELR foreshadows what is to come from Cadillac, while voicing some dissatisfaction with the fit and finish on the Chevrolet Volt.

"Cadillac says the ELR foreshadows the brand's new interior design direction. To wit: The Volt's nerdy instrument panel and Radio Shack trimmings have been replaced by Cadillac's CUE system and more-conventional luxury-car appointments such as leather, wood, and carbon fiber."

InsideEVs has also recently learned that retooling of the Chevrolet Volt's Hamtramck assembly plant in anticipation of the ELR has already begun, and that the first production Cadillac ELR for public viewing will be shown at the Pebble Beach Concours on August 18th.

2014 Cadillac ELR Gets Some Love In Detroit Earlier This Year

GM says that commercial production of the Cadillac ELR will start in 'DHAM in late fall of this year, with the first cars being delivery shortly into 2014.  Pricing is expected to start in the mid-$60,000 dollar range, and will mostly likely only be available at select Cadillac dealerships.