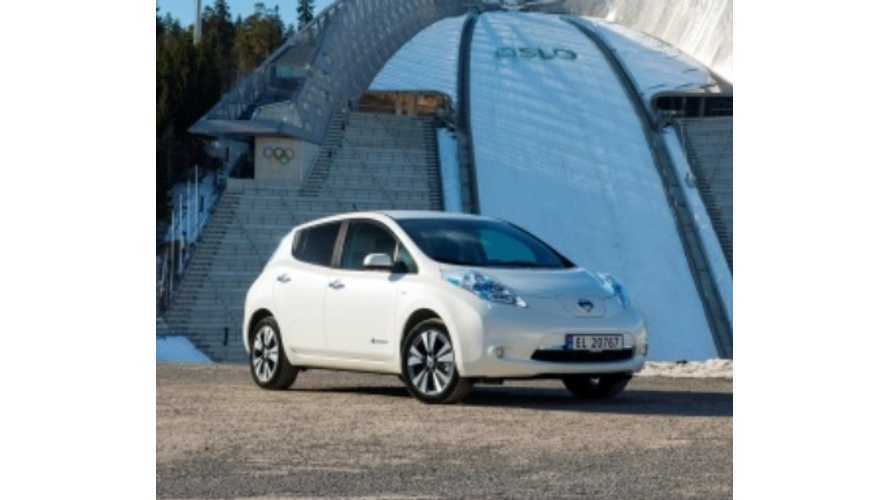 For the third month in a row, Nissan set a sales record for the LEAF in Norway, as sales reached a stunning level of 455 cars in the small country, an increase of more than 50% over previous records set in February and March.

That result also made the LEAF the second most popular model in the country, with a total market share of 3.3%. Only the Volkswagen Golf at 903 copies sold more.  The Toyota Auris was third at 431 copies.

And this month has not been a one-off success - with the LEAF taking the 5th position overall position on the sales charts for 2013, after being 13th overall in 2012. Since the start of sales 18 months ago, more than 4,500 LEAFs have been sold in Norway, making it the best selling car in the Nissan range for that market

Nissan Senior Vice President of Sales and Marketing, Paul Willcox expects even greater success with the new model, which is coming in May, commenting: "In April we have outsold entire ranges of big name models from other manufacturers with our outgoing model. While the competition are offering multiple body styles, engine types and trim levels, the current Nissan LEAF is a single shape, powertrain and specification car."

Past the 455 copies sold directly in Norway – another 80 LEAFs were privately imported to anxious customers, bringing the total new registrations for the car in April to 535.

Overall, the total number of first registrations for electric cars in Norway last month was 612 (along with some 11 delivery vans). Considering that 535 units are new or used LEAFs, that leaves less than 100 new EV registrations for all the other models.

"It is clear that Norway leads the world in electric vehicle sales per capita and as a people we are very proud of this. We are clearly demonstrating to other countries in Europe and across the globe that if you build infrastructure and put some smart incentives in place people buy zero emission cars and use them everyday.

"We may have big oil reserves, but our government sees encouraging electric vehicles as an investment in reducing pollution, raising air quality and improving public health, I hope other countries will learn from this."

Since the beginning of the year, Nissan has sold 1,304 LEAFs in Norway, which represents 2.7% of the local market for new cars.  The total number of electric cars driving in Norway is now about 11,500, of which about 4,500 are LEAFs.