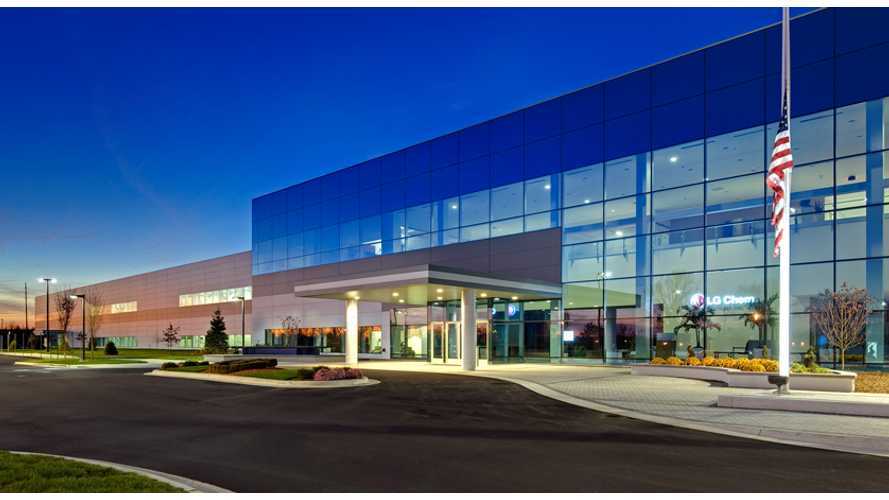 In a move that was foreshadowed a couple weeks ago at LG Chem's earnings conference, the battery maker has officially announced that they will launch commercial production of lithium-ion battery cells in Michigan, for use in the 2014 Chevrolet Volt, starting in July.

For those who have been following the story of US-based battery production by LG Chem in Michigan, from announcement of the plant, to employees being paid to play cards, to subsequent federal inquiries about proper appropriations of DoE funds, this is the conclusion of a very long, almost soap opera-like story.

It should be noted that while the plant design currently calls for about 60,000 Volt-sized packs to be built per year; LG Chem, in response to lighter demand for the car than was originally anticipated at launch, has tooled up only about 60% of that capacity by starting 3 of a proposed 5 assembly lines.

The company has plans to reassess demand later, and will utilize all five lines "by September 2015," which interesting also aligns with expectations of a 2nd generation, 2016 model year Volt, that CEO Dan Akerson recently said would be priced $7,000-$10,000 less.   It is also worth noting that the plant will is expected to produce 23 kWh battery packs for the Ford Focus Electric at some point later in 2013 as well, but annual production is only pegged around 2,000 units for 2013.

Still, in the end, we got there; and are happy to see LG Chem follow through on a decision to build lithium batteries for American cars, in the US.

Test runs have already begun at the facility and the company is targeting the start of commercial production this July. LGCMI anticipates shipping product by the end of this summer. The plant initially will manufacture batteries for the Chevrolet Volt, and the volume is expected to consistently increase depending on the EV market and securing additional contracts. The company is also working to procure additional programs for future production.

LGCMI had originally planned to install five assembly lines in the Holland facility but has set up three lines so far. The company said it is planning on finishing the remaining two lines by September 2015 and will proceed with the plan as they study the market demand and other surrounding circumstances.

LGCMI said the launch of commercial production at the facility will position the company strategically to obtain additional electric vehicle (EV) business in the United States and to compete for energy storage systems (ESS) business. Lithium-ion batteries are expected to play an important role in smart grid electric utility management as storage devices for electricity produced by both conventional and alternative methods.

“LGCMI remains committed to achieving the vision on which our Holland facility was built,” said Sain Park, who is President at LGCMI. “We remain committed to creating good jobs in the Holland community and supplying excellent products to our customers. Our plan is to operate the Michigan plant as a strategic location to meet customer needs, secure future orders and compete aggressively in the ESS battery market.”

The company said commercial production at LGCMI will provide the ability to supply other U.S. automotive companies efficiently and increase its competitive position in securing future orders.