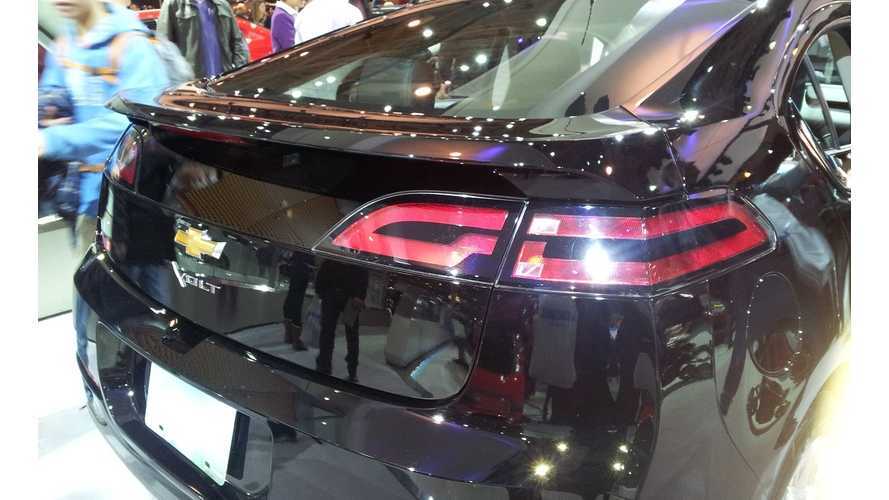 Entering April, GM had only sold only a few hundred more Chevrolet Volts in 2013 then it had in 2012, and was hoping that some huge ballooning of available Volts at the inventory level would pay off in sales dividends for the month.  Unfortunately, it did not happen.

2013 started out with only 1,140 Volts sold in January, as a decision to idle the extended range car's Hamtramck, Michigan facility for three weeks crippled inventories on the West Coast.

However, GM quickly corrected that story and was determined to not have that scenario repeat itself by almost producing 3,000 cars in January (2,949), and even more in February and March (3,298, 2722 respectively).

This month GM produced another 2,768 Volts, and now has near 9,000 cars looking for owners in the United States, an all-time high for dealer inventories.

GM has announced that the 2014 model year Volt will be going on sale in "late May," and that two new color choices will be available (Brownstone Metallic and Ashen Gray Metallic), as well as some other new (and as of yet undisclosed) options.

The early arrival (at least to order) of the 2014s makes the decision to have this many 2013 Volts on hand puzzling (over 180 days worth of inventory), and the vehicle's Hamtramck line maybe in line for an extended spring or summer idling this year to re-aligned stock levels for the August when the next model year beings to ship.

Separately, GM CEO Dan Akerson probably did not do any favors for the short-term sales outlook of the Volt by announcing that the 2nd generation of the car will receive a $7,000 to $10,000 price cut...and that is without "decontenting" the vehicle.  The next Volt platform is expected by many to debut in the fall of 2015, as a 2016 model year.