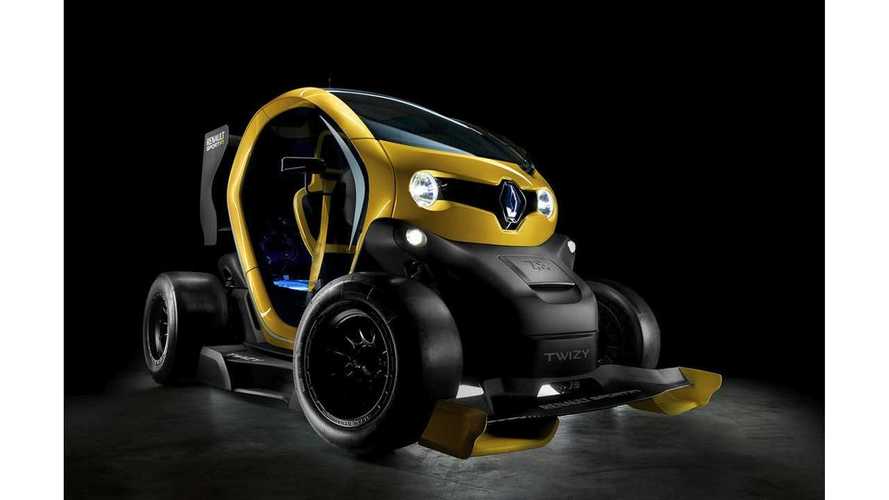 That shadowy concept teased by Renault two days ago has now been revealed and it's a shocker.

The Formula One-inspired electric concept that Renault hinted at is as unexpected as they come.

The electric Twizy Renault Sport F1 concept, strictly a one-off for now, is radical to the extreme.

Equipped with a Renault F1-supplied KERS system, the Twizy Renault Sport zips from 0 to 62 mph in 6 seconds flat.  The KERS system sits in the original Twizy's rear-seat area, which means this F1 version of the diminutive Twizy is now a one-seater.  That 66-pound KERs setups is tied to the Twizy's stock 17 hp electric motor and brings total horsepower up to 97 when fully charged up.

In fact, the Twizy Renault Sport is so zippy that Renault says it matches the pace of the automaker's quickest road vehicle offered today: the Renault Sport Mégane 265

Unlike the KERs arrangement used by Renault in Formula One, the system in the Twizy draws power from two sources: braking and from the Twizy's electric motor.  The Formula One setup relies solely on braking to capture energy.

The KERs System Lurks Within

The KERs system on the Twizy features two modes: boost and recover.  Under recover mode, the F1-inspired Twizy captures energy, while operating similar to a standard Twizy.  But when boost mode is selected, KERs swings into action (RPMs of KERS soar to 36,000, matching the setup used in Formula One) to kick up top speed to 68 mph.  The KERS system can boost power for up to 14 seconds if fully charged up.

Befitting a F1-inspired vehicle, the Twizy Renault Sport features a radical bodykit that looks entirely out of place on a Twizy, but at least it looks ready to toy with the Formula One big boys on the track.  Of course, it wouldn't stand a chance, but it would look almost at home on the F1 circuit.  Handling is claimed to be pumped up from some extreme chassis tuning conducted by the folks at Renault Sport.

Though not destined to ever enter production, we can't help but wonder what this extreme machine would perform like on the track or out on the open road.