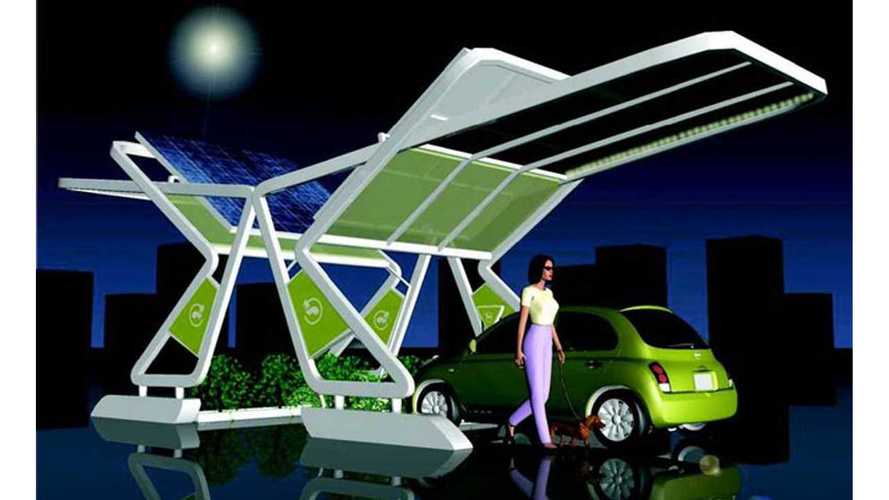 The challenge: Design a solar charging station and accompanying canopy with emphasis on "economy, aesthetics, modular flexibility and sustainability."

Those were the guidelines presented by Duo-Gard Industries (never heard of them...don't worry, because we haven't either.  Here's what Duo-Gard does: innovator in high-performance translucent daylighting systems and strategies) back in October 2012.  Designers from around the globe entered the competition.  According to Duo-Gard, entries poured in from Portugal, Nigeria, Spain, UK, Greece and the US.

"All the entries were impressive, and the decisions were not easy. We were looking for something with WOW impact, coupled with a high level of practicality.  The winning designs integrated this, plus they’re just plain cool. These designs will help us expand our markets and serve them well."

But Papaemanouil, head of iarch architectural firm, won with his poorly named "TWITT" concept, which he says was "inspired by the form of birds sitting on a wire."  Papaemanouil describes TWITT as follows:

"A fascination with the balance in nature, demonstrated by birds resting and flying, led to the concept of TWITT. A compact, steel-and-aluminum-framed structure features photovoltaic panels above a translucent canopy of multiwall polycarbonate, which allows diffused daylight and enhances LED illumination at night. The PV panels rotate around a horizontal axis to achieve optimum slope and performance, regardless of the station’s orientation. The structure’s ballasts eliminate a need for anchoring and actually allow it to be mobile, as well as infinitely expandable."

TWITT will indeed see the light of day.  One unit will be built and installed in the Philadelphia area for Greenbuild 2013 and then Duo-Gard will market it internationally.  For his part, Papaemanouil will receive "three percent of the station’s gross sales for five years."