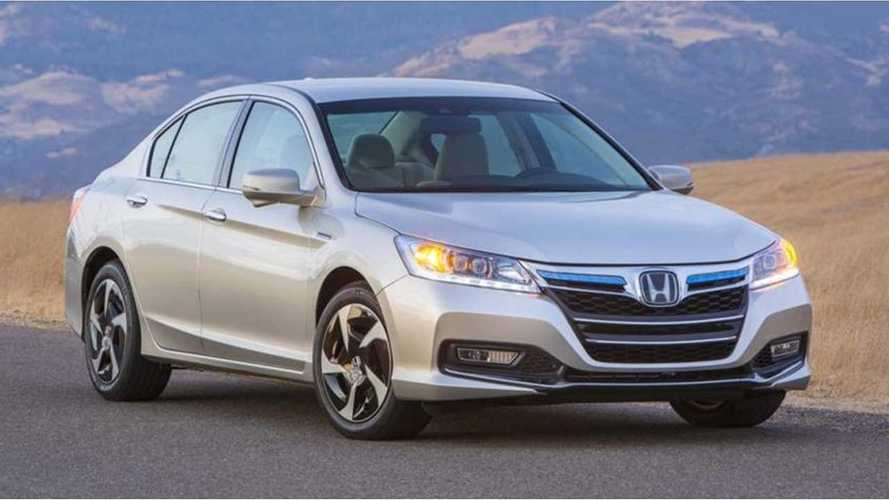 If you're one of the forty-five plus customers who have already purchased a 2014 Honda Accord Plug-in Hybrid, read no further. You already know why your car is much more efficient than the standard gas version (not to mention the 1991 4-cylinder Accord one InsideEVs contributor drove in college). The rest of you fuel misers should continue reading if you know what's good for you.

As you might expect, the Accord PHEV has an all electric range. You can drive 13 miles without using any gas whatsoever, while the hybrid mode achieves a 46 MPGe rating. The hybrid powertrain accounts for 39% of the fuel savings over the standard Accord. Sounds reasonable so far, especially for you Prius drivers.

Honda claims that upgrades to the gas motor and the generator in the PHEV Accord increase fuel efficiency by another 10%. That's a 49% improvement in fuel economy for those of you keeping score at home, but we're not done yet. Reaping the benefits of cooled exhaust gas recirculation and the magic of VTEC, Honda's variable valve timing and electric control system, the new 2.0 liter inline four cylinder gas engine in the PHEV uses 10% less fuel than the outgoing 2.0 liter. 59% and counting.

Then there's the Electric - Servo regenerative braking system. This design converts more kinetic energy into electric energy than the typical hybrid regenerative braking system, and Honda believes it increases efficiency by an additional 8%. Add some low rolling resistance tires and some aerodynamic tweaks accounting for the final 3% and bingo. You've got yourself a plug-in hybrid that's 70% more efficient than the ICE powered version of the same car. In response, we're told Toyota is introducing a new paint color for future Prius drivers called "Green with Envy."

While we don't doubt Honda's numbers (and we'd love to get our hands on this new PHEV to prove them right), the only measure of real world fuel efficiency that matters is how much it costs you to fill up. Here's a call to all Accord PHEV owners.  Share your experience with us.  Are Honda's estimates accurate?