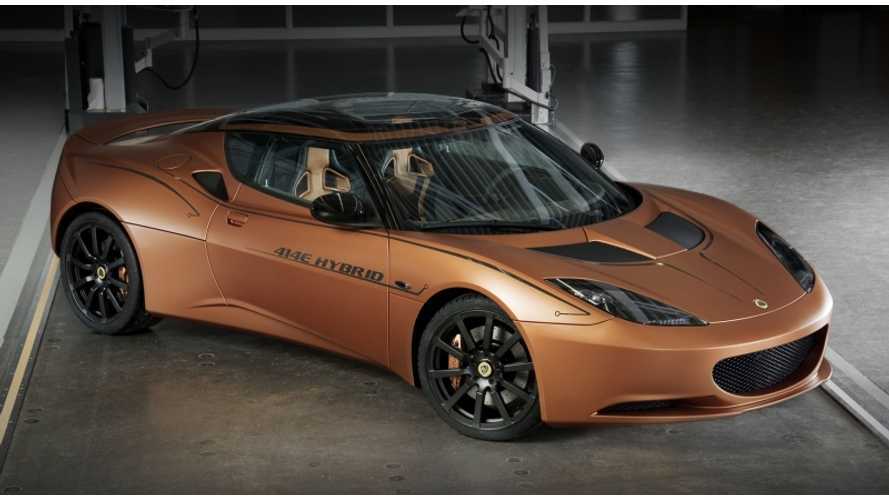 In the automotive world, awards seemingly exist for every piece of vehicular machinery made.  Some are truly earned, while others seem to have only been created so that a particular vehicle can be awarded in some sort of way.

This award, presented to the technical marvel that is the Lotus Evora 414E Range Extender Hybrid, is one of those that slots into the well-earned category.

Days ago, at the 2013 SAE World Congress, the Lotus Evora 414E won the SAE World Congress Tech Award, which is a noteworthy award due to the fact that the world's leading engineers make up the selection committee.

"The Lotus Evora 414E was chosen for the AEI Tech Award for its unique combination of a multimode virtual seven-speed shift scheme, torque-vectoring stability control, and energy and management optimization schemes."

The Lotus Evora 414E zips from 0 to 60 in just 4.4 seconds.  Credit for that zippiness goes to a 1.2-liter three-cylinder engine paired to twin electric motors that power the rear wheels. Combined output is a hefty 408 horsepower and 590 lb-ft of torque.  This setup allows the Evora 414E to operate in pure electric mode or as a more conventional hybrid.

The 414E's driving experience is enhanced, the editors note, by the use of a paddle-shift transmission that mimics the behavior of a conventional 7-speed gearbox.

Electric-only range for the Evora is listed at 30 miles and total range exceeds 300 miles.

Though the Evora 414E seems like a production-ready machine (it's been on the road in some form since 2010), Lotus has yet to green light the spectacular plug-in, but Lotus spokesman provides us with a bit of hope by saying production is "certainly still a possibility."