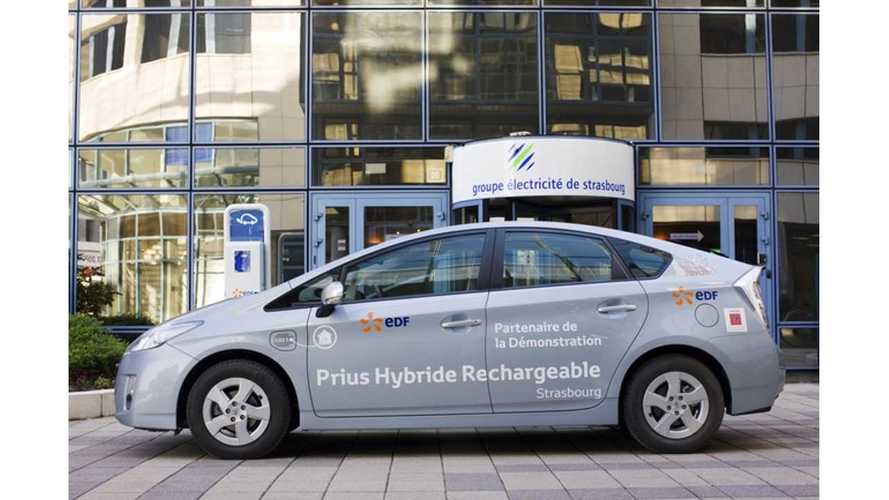 Over in France, a real-world trial of a plug-in vehicle has been ongoing for nearly three years now.  In fact, it's so lengthy a trial we completely forget it was still being conducted.

Moral of the Story: Charge it Often

Thanks goes to Toyota for reminded us that some 70 plug-in vehicles have been on the road since April 27, 2010.

Late last week, Toyota, along with French energy provider EDF and the City of Strasbourg, concluded the three-year Prius Plug-in Hybrid trials.  Immediately upon its conclusion, Toyota revealed final data gathered from the real-world use of plug-ins in France.

All told, the Prius Plug-In Hybrids used in the trial covered 2.5 million miles, so there's ample evidence to back this list of Toyota's conclusions:

Average 46% reduction in fuel consumption compared to conventional gasoline vehicle of similar size with an average charging frequency of 1.1 times a day

Study reveals up to 70% reduction in fuel consumption compared to gasoline vehicle of similar size when recharged 1.6 times a day, leading to a substantial estimated saving of EUR 1,400 on an annual basis

60% of the recharges are carried out at work and 37% at home. Public charging points are welcomed by users for supplementary charging Scheduled charging leads to CO2 emissions reductions of 10% to 15%

Average cost of recharge is around EUR 0.30 (all costs included)

And that sums up Toyota's findings.  While wish that the automaker would've provided more data, we do see two points worth highlighting.  First, Toyota found that 60 percent of charging was done at work.  This counters our belief here that most charging is done at home.

Two, most plug-in hybrids, due to limited electric-only range, benefit from frequent charges as is witnessed by Toyota's claim that going from 1.1 to 1.6 charges per day reduces fuel consumption by 30 percent.