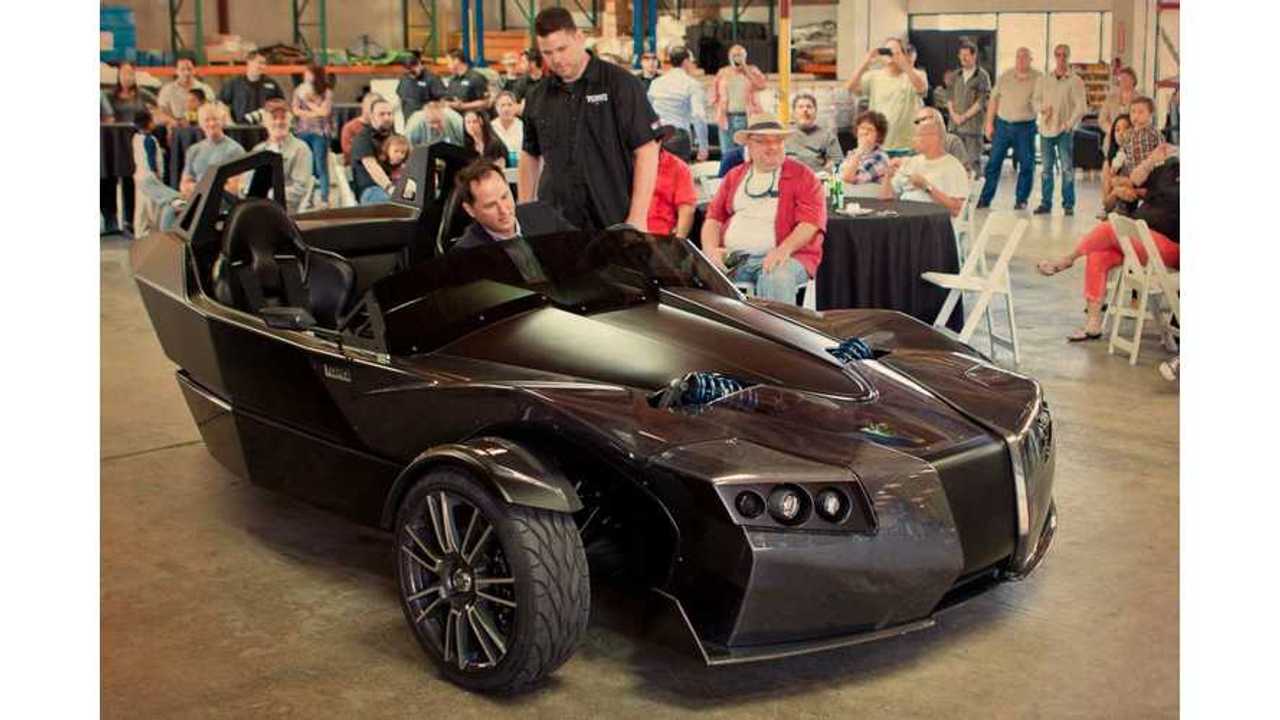 Three weeks ago Epic Motors announced that they would be delivering their first 3-wheeled, all-electric, TORQ roadster on April 6th, 2013.

Some Of The Epic Motors Crew Readies The TORQ For Delivery

The company had a big shindig (and we use the word 'shindig' because photos of the event look like it might also double as the company's annual picnic) to celebrate the occasion.

The first, all black, TORQ Roadster went to former Tesla Director of Communications, David Vespremi, who seemed quite pleased with his purchase.

"As you can imagine, I’m very excited to be the first customer for this fantastic machine,” said Vespremi while noting the limitations of simlar vehicles around the world. “In the U.K. and elsewhere, track-day machines like the KTM X-Bow, Ariel Atom, and others can be registered for road use and driven to and from the track or autocross on weekends...A big part of what appeals to me  about the TORQ is that I can literally charge it in my garage on the same charger as  our Nissan LEAF, sneak out early in the morning in a quiet electric car without the rumble of an engine waking our two young children, go for a spirited drive, and be back again without having disturbed anyone, let alone the environment."

600 lb-ft Of Instant Torque Sounds A Touch Scary TO Us...But We Would Risk It All For A Spin

The TORQ roadster can zip to 60 mph in about 4 seconds, and can pull 1.3 Gs of lateral acceleration thanks to its 3-wheel/wide-stance configuration.  The roadster is rated at 400 hp, and puts out over 600 lb-ft of torque.

The high performance EV has been in development since 2010, as Aptera co-founder Chris Anthony, marked the occasion by reflecting on his Aptera days, the vision behind the TORQ...and the fact his new creation is less expensive that a Tesla or Fisker.

From the event press release:

“In many ways, the TORQ EV was the car I fantasized about while building the Aptera.”   Mr. Anthony said, although he paused to acknowledge his partner at Aptera, Steve Fambro,  before explaining that while sharing the novel 3 Wheel architecture and 100% electric drivetrain configuration of the Aptera, the TORQ was conceived as a very different vehicle aimed at a very different customer. “Whereas the Aptera was designed to be the most efficient commuter car possible, the TORQ, as its name implies, puts performance first and harnesses the       amazing power delivery of an all-electric driveline mounted to  featherweight platform to provide breathtaking acceleration and       handling.”

Anthony made  a point of highlighting the fact that the TORQ Roadster is not only  considerably less expensive than its two high-performance electric vehicle counterparts from Northern California based contemporary, Tesla Motors and Fisker, but that they were designed to be much more of an open-platform, and  user configurable as well.

Epic plans on building about 50 TORQs this year, and followed by a "substantial increase" in 2014 TORQ.

It should be noted that when the delivery announcement was first made last month, Epic did tout that they already had a waiting list for the vehicle.   However, given the fact they are still saying 2013s are available with a $10,000 refundable deposit ($5,000 for 2014s), we are thinking the demand may not be all that great for the $65,000 extreme performance electric vehicle.