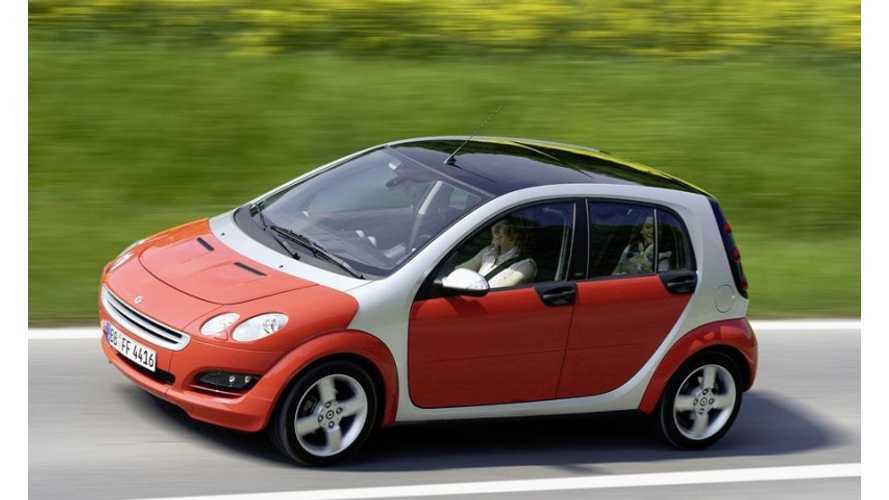 Daimler confirmed that it will offer electrified versions of both the next-generation Smart ForTwo and ForFour.

The next-gen ForTwo is expected to be unveiled sometime in 2013 and could head to production by early 2014.  We'd expect the electric version to launch a few months after the gas and diesel variants enter production.  But since the current 2013 Smart Fortwo Electric Drive is already a production vehicle, following it with a next-gen electric Fortwo was no surprise to us.

The real news here is that Daimler confirmed that the upcoming ForFour, which is expected to by unveiled in 2014 as a Model Year 2015 vehicle, will get the electric treatment, too.

The automaker says the introduction of an electric ForFour is but one part in its grand initiative to offer the  "most extensive portfolio of electric vehicles in the industry."

Again, we expect the conventionally-powered versions of the ForFour to come first, so perhaps the Electric Drive ForFour will arrive  sometime in late 2015.

Few details are known on the electric ForFour, other than the fact that it's co-developed with Renault and will be rear-wheel-drive.  Power output is expected to be around 90 hp, but that's just an educated guess at this point in time.  Production of the electric ForFour will take place in Slovenia alongside the similar, upcoming Renault Twingo, which shares its platform with the ForFour.

Just in case you were wondering, the next-gen Renault Twingo will almost certainly be offered in an electric version, too.