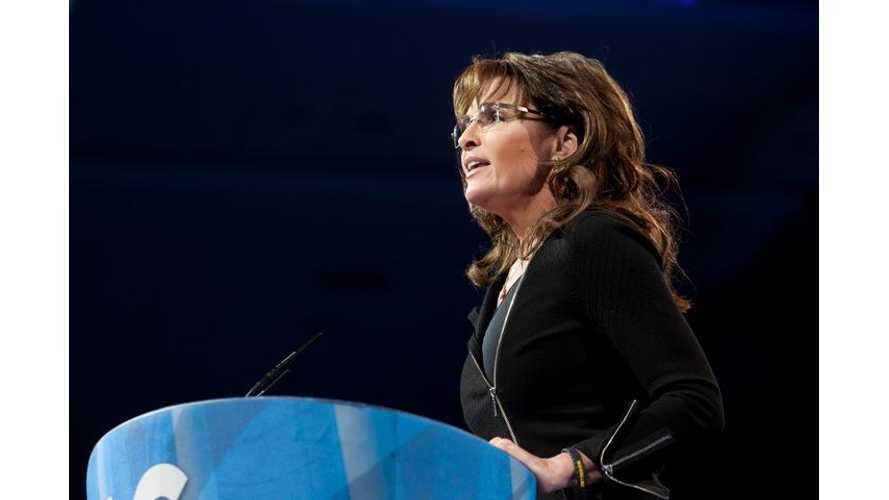 I know we should probably tread lightly on criticizing Sarah Palin, considering she currently has 3,527,381 Facebook likes, and over 33,000 specific 'likes' of the below statement at time of press.

Like or hate her, sometimes she just says things, or in this case, writes things, without thinking first.  Stupid things.

Now, we can understand taking the opportunity to give Fisker a kick now that it is safely down for the count, as the automaker is taking some high profile "Obama" DoE ATVM seed money* with them.  And if that was the end of it, we would not even blink an eye at the story.

However, to also swipe at Tesla, who is a big success story that is currently repaying their DoE loan early, and to knock on the Chevrolet Volt, which routinely sells more than 2,000 copies a month (something only 3 other gas cars over $40,000 can do regularly) is just offside in our minds.

This Is What As Known As "Off The Rails"

We think it is worth nothing that the ATVM loan program to promote US technology and manufacturing was introduced by the Bush administration...and we don't think that was a bad thing either.  Without its various successes or failures, along with the federal credit program (up to $7,500), we would still be in "nowheresville" when it came to the amount of electric vehicles on the road today.

Advancements, like the revolution we are currently experiencing with plug-in vehicles, don't usually come easily, or on the cheap.  To us, it appears both parties, and the plug-in segment itself, are all "losers" from careless, thoughtless and non-factually backed press like this.

It is also interesting to note the Tesla "bricking" incident pertained to the Roadster specifically, and not the "Obama-subsidized" Model S, which the company says you can't brick, even if it is fully discharged;  but if you do figure out how to do it, they will still cover under warranty.

Tesla CEO Elon Musk was quick to take to his current social media weapon of choice, Twitter, to say the Palin comments wounded him personally:

Or maybe we are just to close to the subject matter to be objective ourselves?  But we doubt it.

Sarah Palin's Facebook statement (and subsequent thousands of comments) can be found here.  Why don't you let her know what you think?