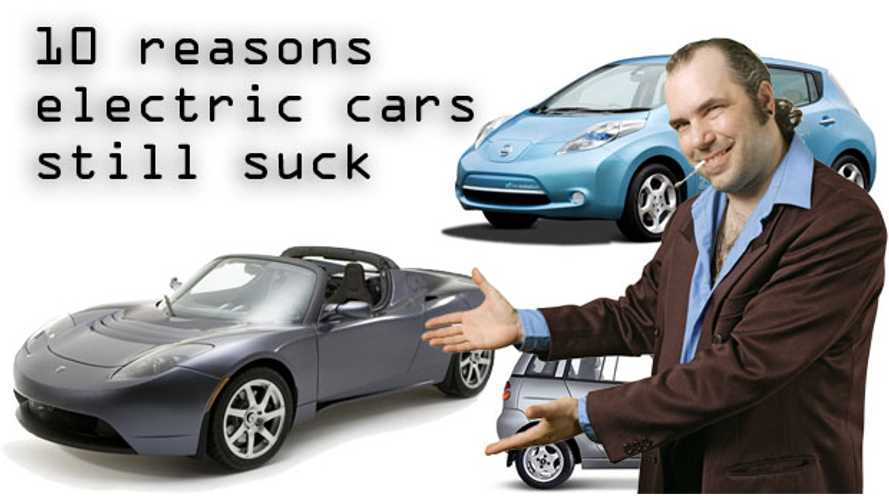 Every so often, while perusing news feeds to dig for the latest info on plug-in vehicles, we stumble across an article that catches our attention, not for its timeliness or relevance, but rather for the idiocy contained within.

That's the case here with this 2010 CNET article titled "Ten Reasons Electric Cars Still Suck: We Unplug the EV Hype."  It's dated, that's for sure, but it's still found on CNET's site, which makes us wonder whether CNET should "revise" it or remove it due to the fact that most of the highlighted reasons are now factually incorrect (note: most of the 10 reasons present by CNET were inaccurate even back in 2010.)

CNET writer Rory Reid, a known opponent of electric vehicles, says CNET "spotted several crucial drawbacks in EVs that mean they're potentially more expensive to run and are, in some cases, more harmful to the environment than their gas-guzzling counterparts."

CNET highlights 10 reasons why taking the "electric car plunge" is a bad decision.

Here we present that list (minus Reid's lengthy explanations) and ask of you to chime in on whether or not any of the points made by Reid have validity.

10. They're expensive to buy

9. They're expensive to run

8. Zero emissions is a lie

7. They take forever to recharge

5. The driving range is pathetic

1. They're useless for inner-city inhabitants

In all fairness, Reid concluded with this statement back in 2010:

"Electric cars have a long way to go before they're viable alternatives to cars that use internal combustion engines. We welcome their development and in many cases remain hugely impressed by the best examples of electric vehicles, such as the Nissan Leaf and Tesla Roadster. The simple fact, though, is EVs still have numerous flaws that seriously restrict their appeal.  All the problems we've mentioned above can be fixed, but some will take longer than others to solve. Until that time, it looks as if hybrids and old-fashioned gas-guzzlers are a much more sensible bet for the average punter."

So, we ask, we're EVs this flawed back in 2010?  Was Reid way off the mark?  Have all the "problems" been fixed?  Are EVs now more "sensible bet for the average punter?"  Let's discuss in Comments below.