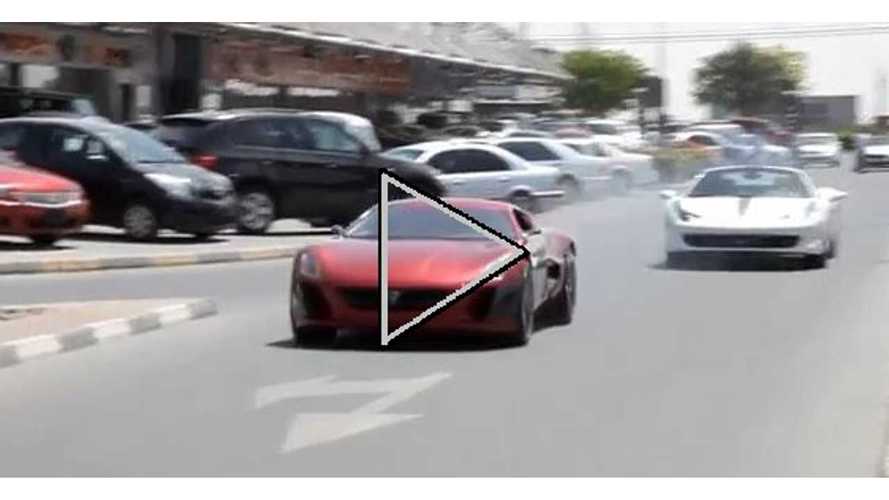 Behold the off-the-line prowess of the electric supercar.

Here's a video of the 1,088 horsepower electric Rimac Concept_One in a head-to-head impromptu drag race against the formidable Ferrari 458 Spider.

The uber-exotic Rimac Concept_One, with its 1,200 pound-feet of torque, is one of the world's most powerful automobile.  It's four electric motors shoot it off the line with urgency that's matched only be a few other automobiles.  With a 0 to 60 mph time of 2.8 seconds, there's no chance the Ferrari 458 Spider, with what appears to be a serious power deficiency (540 hp) when it's stacked up against the electric Rimac, can match its pace.

This impromptu match up occurred in a parking lot (street racing is highly illegal, dangerous and never advisable) in the Middle East where Rimac is showcasing the vehicle's capabilities and perusing potential customers.

Range, which obviously didn't come into play in this brief race, is listed at 310 miles for the Rimac Concept_One.  Its massive 91-kWh lithium-iron phosphate battery pack might just be the largest ever fitted to a production electric passenger vehicle.

The Croatian-built Rimac Concept_One is expected to enter production in late 2013.  Its projected starting price is a wallet busting $980,000.  Only 88 units will be built and first deliveries will commence in early 2014.