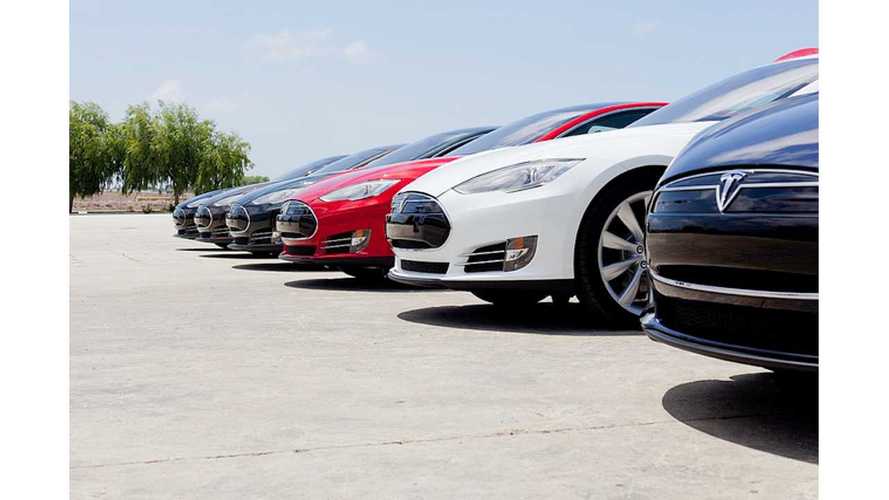 Tesla CEO Celebrates The First Deliveries Of The Model S In 2012. Will He Celebrate Being The EV Sales King For 2013É

When Tesla took over the electric vehicle sales lead in January of this year, we chalked-up the win to a perfect storm of issues plaguing the other plug-in automakers.  There was a three week factory idling of the Volt, a production issue with the LEAF (as in there wasn't any), and Ford had seemingly lost their way getting their new C-Max Energi to costumers.

Then January turned to February, and the Model S hung tight with the Chevy Volt, both around 2,700 cars sold through the first two months, with the Nissan LEAF, Ford C-Max Energi, and Toyota Prius plug-in all falling well off the pace.

Now, it appears as production for the Model S is peaking, the demand for the Volt may have crested, at least until the 2014 model goes on sale in May of this year.

For March, Chevy sold 1,140 Volts, while Tesla churned out better than 500 electric sedans per week to customers during the month, and sold an estimated 2,150 cars; based on previous month's sales estimates less Tesla's own statement that they sold "more than 4,750" cars for the first quarter.  That gives Tesla a 500+ sales cushion on the lead for top US seller of EVs going into April of this year.

Interestingly, the battle for first overall may not end up against the extended range Chevy, as Nissan's new 2013 LEAF, complete with some new features on the high end, and a $6,400 pricing reduction at the low end (now starting at 28,800), as re-energized the EV, and made the LEAF the top seller for March with 2,236 cars sold.  Nissan anticipates April to also be a very strong month for sales as more inventory fills dealer lots.

Regardless of whoever crosses the finish line in first for 2013, overall electric vehicle sales are on pace to easily obliterate 2012 results, and that is good for everyone looking to buy (or make) plug-in vehicles in the future.

To check out the overall sales of electric vehicles, as well as individual reports on each plug-in, for March of 2013 check out our monthly scorecard here.