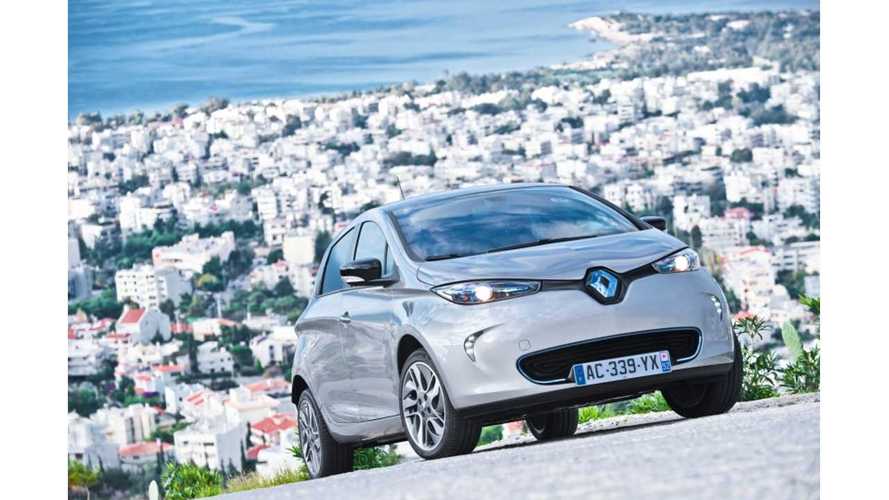 With March 2013 US sales results for plug-in vehicles pouring in yesterday and, Nissan confirming that LEAF sales soared to a record high, we couldn't help but wonder how the Japanese automaker's partner in crime, Renault, is faring in France with sales of the recently launched and highly anticipated Zoe (we'll add a dash of Kangoo Z.E. in the mix, too).

It's not often that Renault reports monthly plug-in vehicle sales figures so quickly, but results for March 2013 were an exception.

When a plug-in vehicle dominates the sales charts, then automakers like to boast.  That's the case with Renault as it's reporting that Zoe was the top-selling electric vehicle in France in March.  Sales of the Zoe hit 1,089 units in March, which might not sound too impressive until you consider that Zoe captured a remarkable 80 percent of the electric passenger vehicle market in France last month.

Yes, Renault is rather dominant in France, but still only 30 percent of total automotive sales in France in March were of vehicles with a Renault badge.  So, Zoe grabbing 80% of the electric vehicle segment is a feat worthy of recognition.

Ready for the dash of Kangoo Z.E.?  The conventional Kangoo was France's top-selling light-duty commercial vehicle in quarter 1 of 2013, but there's no plug in the standard Kangoo.

So, we'll turn our attention to the fully electric Kangoo Z.E.  Sales of Renault's electric van checked in at 319 units in France in March, bringing the YTD total to 1,051.  Again, though the numbers may seem low, the Kangoo Z.E. accounts for 80 percent of France's light-duty commercial vehicle sales in the plug-in segment.

Soon, Renault will release global sales figures that will include Zoe and Kangoo Z.E. (Twizy and Fluence Z.E., too) sales throughout Europe, which will paint a broader picture of how Renault's plug-in vehicles are faring beyond the borders of France.