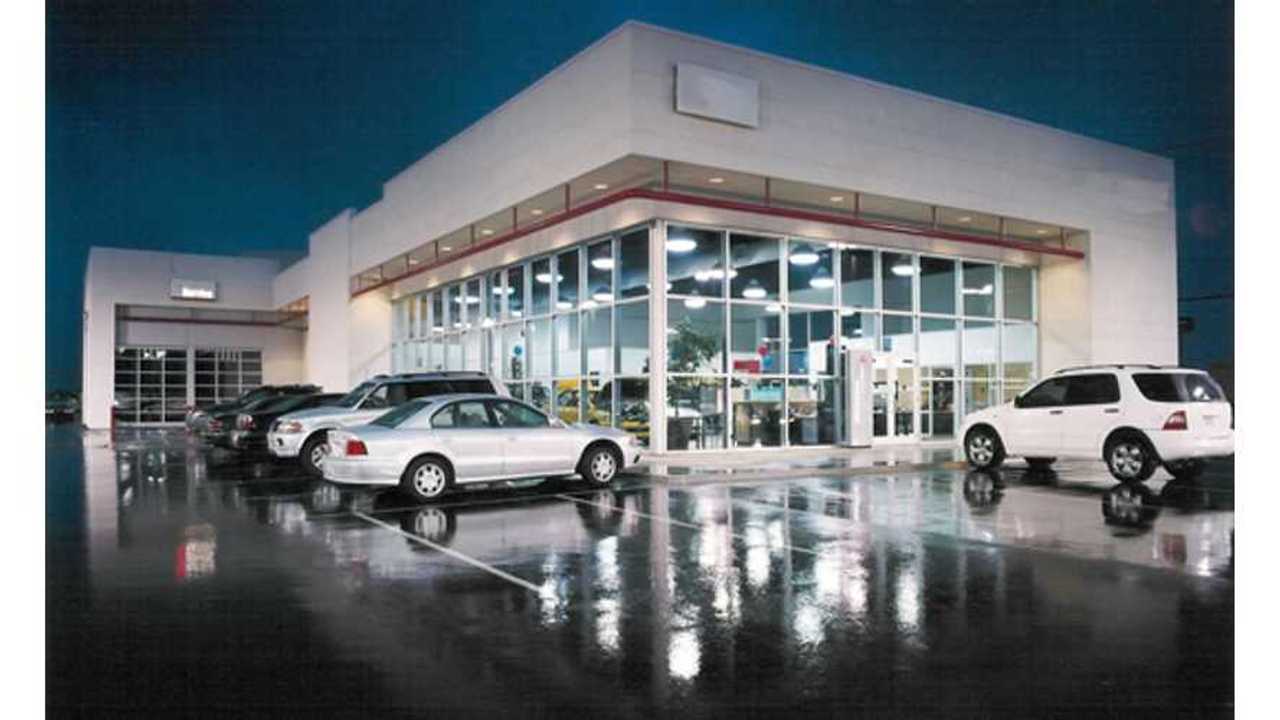 March of 2013 has set a new benchmark for sales of plug-in vehicles, as huge monthly gains at some automakers (and steady results at others) have pushed the overall number of plug-in sales to an all-time high in the US for March.

Most notably, large sales (and production increases) at Nissan with the LEAF, and at Tesla with the Model S, combined for over 4,000 fully electric cars sold during the month, spurring the record result.

NOTE: This scorecard is published as soon as the first auto maker reports, and is populated/updated throughout the day as soon as more data is available.

Chevrolet Volt: GM has a bit off an off month as only 1,478 Volts were sold.  (full story here)

Despite increasing production at the Hamtramck facility over the past two months to fill in dealer inventory, plug-in sales were a touch weak at the US automaker.  To remedy this, GM nationally discounted the car by $3,000 to its dealers to round out the month.

In February,  Chevrolet sold 1,626 units, which was up 60% up from a year ago's result.  This month however GM found itself up against an incentive laden (and consumer hungry) March of 2012, when the company sold 2,289 units.

This is the first year-over-year miss for the Volt since it went on sale in December of 2010.  Sales were off 35%.  For the month, GM did continue to produce Volts at a break-neck speed, building 2,722 in Michigan.

Recently, Chevrolet has said that the 2014 edition of the Chevrolet Volt will go on sale in "late May" and has released the first couple new options on the car...new paint color choices.

Nissan LEAF: Nissan set the all-time monthly sales record for any pure electric vehicle sold in the US for March, with 2,236 LEAFs sold.

As forcasted last week by Nissan execs at the NYC Auto Show, March's impressive result of  "over 1,900" LEAFs sold, announces Nissan's return to competing for the crown of top selling plug-in auto maker in the US*

Previously, in February Nissan sold only 653 LEAFs as the company almost completely ran out of 2012 inventory to sell while waiting on US production of 2013 LEAFs to begin.

We expect April's result to be just as impressive, as Nissan enters the month with over 2,300 cars at the dealership level, with more on the way.  Nissan has said they expect inventory to be optimized by the end of next month.

Tesla Model S: Tesla does not give out exact monthly sales...but they do give a lot of updates, and consumers fanatically track their progress, so we can make a pretty accurate guess.

After estimating Tesla sold about 1,200 Model S sedans in January (thanks to a pull forward of sales in 2012), and 1,400 in February (thanks to a week's worth of down time in January, Tesla ramped weekly production to over 500 vehicles per week during the month, and likely sold around 2,150 cars in March of 2013.  We estimate around 4,700 sold in the quarter, besting earlier predictions by the company of 4,500.

UPDATE:  At least 4 times a year we get quarterly updates on sales, and Tesla confirms not only was the company profitable in Q1 of 2013, but they sold more than 4,900 cars between January and March.  Just to make the numbers add up, we will bump our March sales estimate up by 150 units to 2,300 Model S sedans sold in March.  (hey, we were pretty close)

But unlike Tesla, they really don't make or sell any cars anymore.

It makes the March 2013 sales list as more of a novelty than anything else at this point, and because Fisker does still physically have a few dealership left selling cars.

That being said, the company has not built a single Karma  since July, they have no CEO, a takeover bid by Geely Automotive failed, and Fisker has put all its US workers on furlough.

As for sales specifically, Fisker started the month with 107 2012 Karmas inside the US still left to be sold, and they ended the month with 88...using our patented "Inside EVs Decoder Ring" we will put Karma sales at 19 for March.

Ford now reports that sales of its Fusion Energi in March checked in at at decent (especially considering the lack of inventory across the country) at 295 units.

The Fusion plug in went on sale at the very end of last month, but still managed to sell 119 copies.  How short a window?  Well, when we talked to a representative in connection with Ford, just days before month's end, he said that the company would not get any out during the month.

The Fusion Energi basically offers the same package as the C-Max Energi, but in a larger sedan package. The third plug-in to be offered from Ford has just been rated by the EPA at a combined 100 MPGe (92 MPGe highway, 108 MPGs city), and has an all-electric range of 21 miles.

Unlike the C-Max Energi, the Fusion Energi has been priced in-line (and above) the other 5 Fusion trim levels in the model lineup, so as not to 'steal' sales from itself. This has resulted in a starting MSRP of $39,495, which we feel is a bit steep.

After selling only 693 plug-ins Prius in February, and 874 in January, with no significant issues or inventory shortages, the other plug-in competition looks to be eroding the electric Toyota's base.

For 2012, the Prius plug-in finished as the second best seller in the segment (behind the Chevrolet Volt), with 12,750 units sold, but we now question whether Toyota can put up enough of a fight to hold that position against the likes of the new 2013 LEAF, the Tesla Model S, and a similar (but longer ranged) Ford C-Max Energi.

After a strong start in 2012, Ford's much heralded Michigan assembly facility (MAP) just could not get the ball rolling in January and February, leaving dealers very short on C-Max plug-ins to sell.

In February 334 Energis were sold, after a dismal January result of 338.  Ford entered 2013 with only 175 available units to sell, and ended February at around 600.   March's result should be significantly improved, as Ford now has approximately 1,000 C-Max Energis in stock.   Still not great, but getting there.

Honda Fit EV: In March, Honda sold 23 Fit EVs, and while that might not sound like much (ok, it isn't really), it represents Honda's 2nd best selling month of the EV, and equals the total amount of electric Fits the company sold in the first two months of the year.

In February, the Honda Fit EV took off,  improving on January's result by near 90% ...from 8 units sold to 15.  (Editor's Note: we are working really hard to spin Honda's results in a positive light this month)

Although the Fit EV is purely a compliance play for Honda to satisfy CARB, they have still built (and need to sell) 1,100 of the 82 mile EV. At the current selling rate of 14 per month, it is going to take Honda 6.5 years in total to move all their cars. We think it might be a touch hard selling 2013 model year cars in 2020.

We feel a price reduction (on the $389/lease offer) is also in order.

In March, Ford enjoyed another decent performance out of its all electric car, as 180 Focus EVs were sold..

Last month (February 2013) , Ford sold 158 Focus Electrics in February, or nearly double the amount the automaker sold in January.  However, Ford is not expecting 2013 sales of the model to improve by very much overall, despite a tripling of the dealership base that is able to sell the plug-in car.

In February, only 54 plug-in SUVs were sold.

Toyota introduced a deep discount incentive of $10,000 off RAV4 EV pricing in February, with 0% financing. an offer that seemed to spur on new interest in the vehicle.

That discount, as well as federal and state incentives means that consumers in California were getting a total of $20,000 of the Toyota's MSRP price of $49,800.

Mitsubishi i-MiEV:   /thud...was the sound on Mitsubishi's 2-month sales revival bottoming out in March, as the Japanese company ran low on old 2012 inventory to sell, and moved only 31 i-MiEVs during the month

Despite some massive sales improvements for the first months of 2013, make no mistake, that was a sell-off, not a resurgence.

Sadly, the streak can't last forever, as Mitsu is down to its last couple hundred 2012 model year i-MiEVs, and as one might notice, there is still no 2013 model year available in the US.

Honda Accord Plug-In: March was another month of 'meh' results for the electric Accord as a paltry 26 were sold.

Even though Honda said their plug-in Accord went on sale on January 15th, there really hasn't been any inventory at all to speak of.

In January, only two were sold, with 17 sales registered for February.

The inventory problem looks to persist as Honda ended March with less than two dozen plug-in Accords in stock.  Look for April's result to also be low double-digits.

The 2-seat Smart electric car gets 68 miles of range from a 17.6 kWh battery.

And before you say that might not be enough range for you; if you live in the city, you will easily destroy that range benchmark, as the Smart EV is a virtual brick in the wind tunnel skewing the range rating much lower than what can be expected driving in town. Conversely, that also makes the Smart EV a terrible choice if you drive on the highway a lot. City MPGe is rated at 122, while highway fuel efficiency falls all the way to 93 MPGe.

Of note: Smart did record 2 Fortwo ED sales in January of 2013, but these were not the 3rd generational Smart EDs (2013 models) that are destined for public consumption in the spring of this year, but reportedly from an earlier 2nd generation offering.

Fiat 500e:  Fiatsler's answer to CARB compliance requirements has been slated to go on sale this summer, with a pricing announcement on the car coming April 13th.  InsideEVs expects the car to be priced just over $35,000.

The 500e's 24 kWh lithium battery has been rated by the EPA to produce 87 miles of all electric range, and MPGe efficiency in the city is pegged at 122, and 108 on the highway, for a combined 116 MPGe figure.

Fiat has also announced this month that they will be providing 12 free days* of car rentals per year to purchasers of the EV, for when longer trips are required...at least for the first three years.