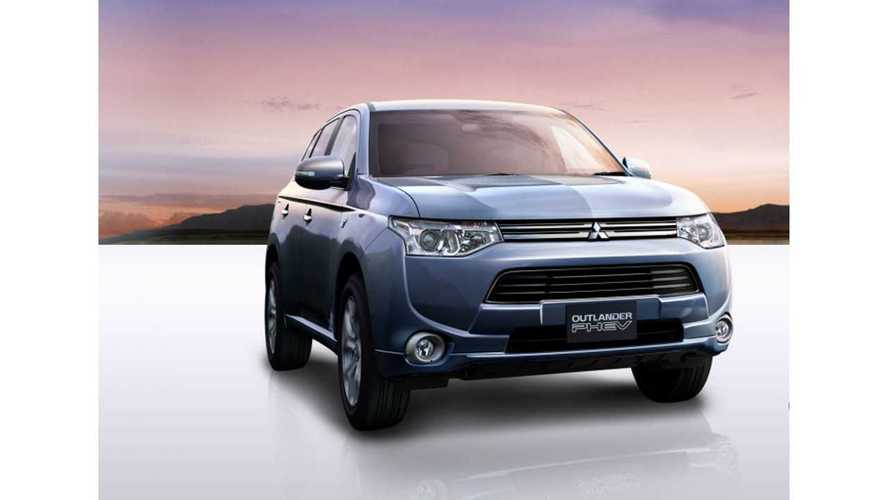 Mitsubishi Has Received Orders For Over 7,500 Of Their Outlander PHEV

Mitsubishi Japan has released details on two recent incidents of overheating lithium-ion battery packs used in their Outlander PHEV (now on sale in Japan) and some i-MiEV electric vehicles.  Both events, which occurred in Japan, involved batteries manufactured by Lithium Energy Japan (a joint venture between Mitsubishi and GS-Yuasa).

No one was injured and no facilities damage was caused in either incident.

While the specific causes are yet to be determined, Mitsubishi believes both cases were related to "a change in the production line of the battery supplier".  Details on this production line change have not been shared.  Until such causes are confirmed, Mitsubishi has asked the 4,000+ Outlander PHEV owners in Japan to refrain from both external charging and using the on-board "Charge" mode.

The first incident occurred on Mar 18th at the Mizushima Plant.  A 16kWh i-MiEV pack connected to a charge/discharge device for finished goods inspection at the battery assembly laboratory started to overheat.  About an hour later, the battery pack caught fire and the local fire department was called in to extinguish the flames.

Since the process change, Mitsubishi as shipped 45 units  equipped with the same battery to corporate fleets and 68 units to the domestic market as spare parts.

The second incident occurred on Mar 21st with an Outlander PHEV.  The Outlander PHEV uses a smaller 12kWh pack compared to the i-MiEV's 16kWh, however both batteries share similar design structure.

The completely assembled Outlander was being prepared for delivery.  After being fully charged the day before, an odor was observed when attempting to move the vehicle.  Upon further investigation it was found that one of the battery cells was overheating and melting.  This caused peripheral cells to also melt.  The pack, which is made up of 80 cells, is separated into 3 blocks.  Only 1 of the 3 blocks was affected.

Mitsubishi is currently performing "intensive investigation" with the battery supplier to understand the root cause to both events.  As new information is learned, Mitsubishi has promised to update dealers and customers.  Until such time, Mitsubishi has stopped production and sales of both the Outlander PHEV and minicab i-MiEV.

Overall, Mitsubishi has received over 7,500 orders for the Outlander PHEV, and has delivered 4,000 in Japan.  Seperately, batteries made by GS Yuasa, are also those plagued with overheating problems in Boeing Co. 787 jets.

Also, check out the forums at InsideOutlander to discuss and get all the latest updates.