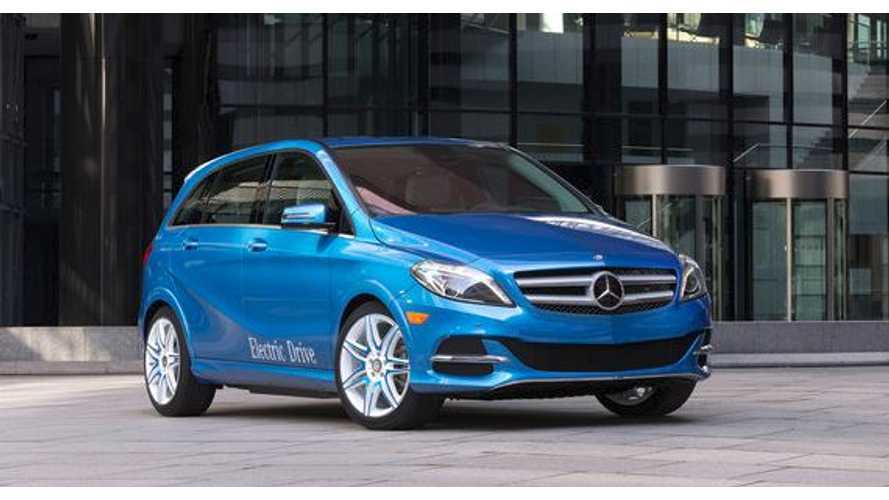 Mercedes-Benz has officially confirmed that its compact luxury crossover, the B-Class, will head to the US in electric-only guise.

B-Class Electric Drive US Bound in 2014

The B-Class Electric Drive will launch in the US in early 2014, marking the first electric-only offering from Mercedes-Benz in the US.

For once, US buyers will get first crack.   The B-Class Electric Drive won't launch in Europe until a few months after it hits US shores.

The five-seat B-Class Electric Drive features a 100-kW (134 horsepower), 228 pound-feet of torque electric motor that powers the vehicle’s front wheels.  M-B says the electric B-Class can zip from 0 to 60 mph in "considerably less than 10 seconds."  Maximum speed is listed at 100 mph.

Ample range of up to 115 miles (US city) according to Mercedes,  and 200 km (124 miles) overall on the NEDC cycle (which means a US range rating of about 80-90 miles)  is provided by the Crossover's 28-kWh lithium-ion battery pack.  Here's how Mercedes-Benz describes the range of the electric B-Class:

"Depending on the respective driving cycle, the range is around 115 miles (US city, or 200 km/124 miles on the Euro-NEDC). This means that in addition to emission-free driving in urban traffic and on short-range trips, longer journeys can also be undertaken without any problems – such as the distances covered on a daily basis by commuters going to work, for example."

The B-Class has been available in several countries across the globe since 2005, but never has it been offered in the US.  That will change in early 2014 when the electric version launches here.  The B-Class Electric Drive, which was unveiled just moments ago at the 2013 New York Auto Show, is based on the second-generation B-Class, a vehicle that first debuted back in 2011.

Additional specs for the B-Class Electric Drive are not available at this time.  Pricing, which is obviously the biggest factor in determining if this electric Benz is a fit for you, won't be announced for quite some time.

Check out the live launch here: