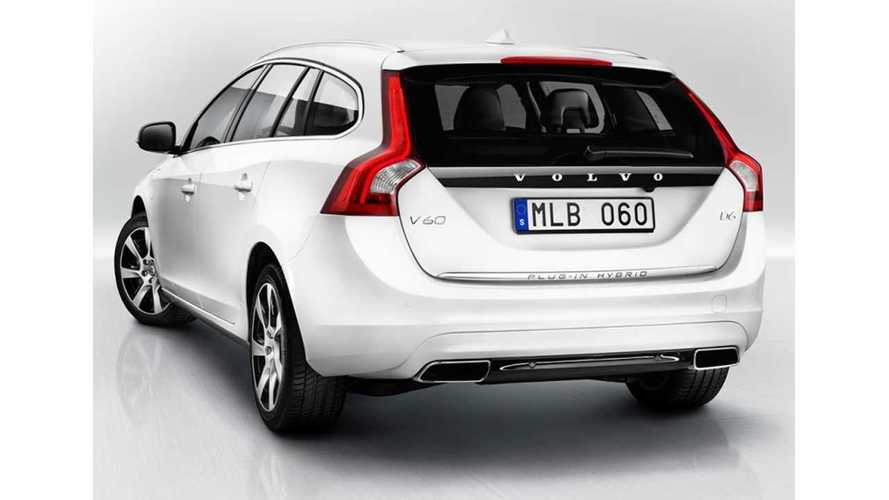 The Volvo V60 Plug-in Hybrid (along with the non-plug-in 2014 V60 R-Design wagon) made its US debut at the 2013 New York Auto Show.  And there's now confirmation direct from Volvo that the conventional (non plug-in) V60 wagon will be sold here in the states after a two-year hiatus.

The conventional V60 will return to the US in early 2014, so does that mean that the V60 plug-in will be sold in the US, too?  Speculation is that it may wind up here someday, perhaps in a slightly altered form.

In electric-only mode the plug-in station wagon can cover up to 31 miles, but that's likely an optimistic number given a battery capacity of only 11.2 kWh, of which only 8 kWh is utilized.  The V60 plug-in hits up to 78 mph on electric-only power, but is rather frisky in hybrid mode.  The 0 to 60 mph dash can be accomplished in 5.8 seconds and top speed is listed at 143 mph.

Ok, so it's a performance machine, but how do the fuel economy figures look?  Volvo says the official fuel economy figure is 155.2 mpg (under Europe's NEDC cycle), but no buyer is likely to get that out in the real world.  As Autocar discovered, the V60 plug-in seems tuned with towards performance, not efficiency.  With that said, the V60 plug-in will easily return 32 mpg in hard urban driving in hybrid mode, a number that's quite respectable given the wagon's hefty curb weight of 4,400 pounds.

Provided it comes to the US, the real question is "Should you buy one?"  Autocar's answer to that question is basically no, but here's the magazine's complete response:

"So does this rather special V60 make sense? Well, leaving apart the poor ride quality, even Volvo management admits that if you do a highish mileage this isn't the car for you. On a long motorway run, you're basically driving a diesel Volvo with a bit of a weight problem.""But if you have that short city commute, travel into central London (no congestion charge) and like the sound of low benefit-in-kind charges, it's possible that the V60 could work for you."

We'd agree that with a price tag in the mid-$60,000 range, this plug-in wagon would be a difficult sell, but Volvo knows that.  If it shipped stateside, we're sure a price drop would come this way, too.