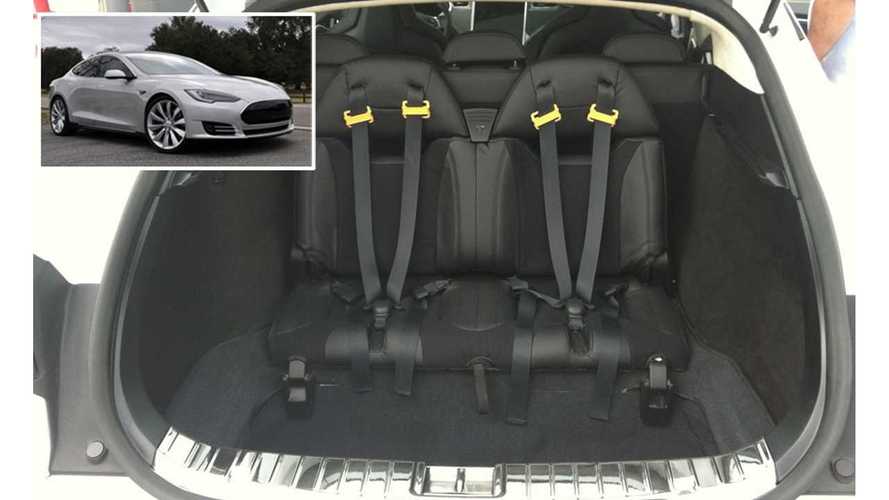 Initially, there was a significant amount of chatter surroundings the Tesla Model S' ability to ferry up to 7 passengers.  That discussion had seemed to of died down when journalist types first viewed the 3rd-row jump seats fitted to the Model S.  Eventually, the 7-passenger capabilities of the Model S were almost never mentioned, but that's changing now.

Consumer Reports is currently testing the 3rd row in its own Model S, after waiting two months for the $1,500 option to be installed due to Tesla not having the extra seats ready for distribution.

Consumer Reports describes the lengthy delay in this way:

"When we took delivery of our $89,650 Tesla two months ago, the third-row seat we had ordered was not ready for distribution. The $1,500 option would be installed when it became available. The thinking was, there is no sense holding up the car for a feature that can be added later."

With the seats in stock at a Tesla service center in Queens, New York, Consumer Reports wasted no time driving (actually, Tesla reps picked up the vehicle and then later returned it) the Model S there for some service (a cracked windshield needed to be replaced) and fitment of the optional third row.

With seating for seven now in place, Consumer Reports says the third row, which appear to be "wee jump seats" function like a "clever piece of origami" by folding away into a well when not in use to conserve truck space, yet still functioning as useable seats for children over 37 inches tall.

When folded away, the seat consumes some cargo space, but as Consumer Reports notes, the Model S is not short on cargo room to begin with and the seats don't diminish the sedans capacity by too much.  There's always the "frunk" (front-mounted trunk) for additional storage.

The third row seats are rear-facing units with five-point harnesses.  Folding the seats away is a bit complicated, remarks Consumer Reports, but the multi-step technique was demonstrated several times by the Tesla rep on hand.

By adding two seats to the Tesla, Consumer Reports now claims that its Model S offers the highest passenger capacity of any electric production passenger vehicle.  Soon, that capacity will be put to the test as Consumer Reports will load up the Model S with seven passengers to see if it's truly a viable alternative to a station wagon or minivan.