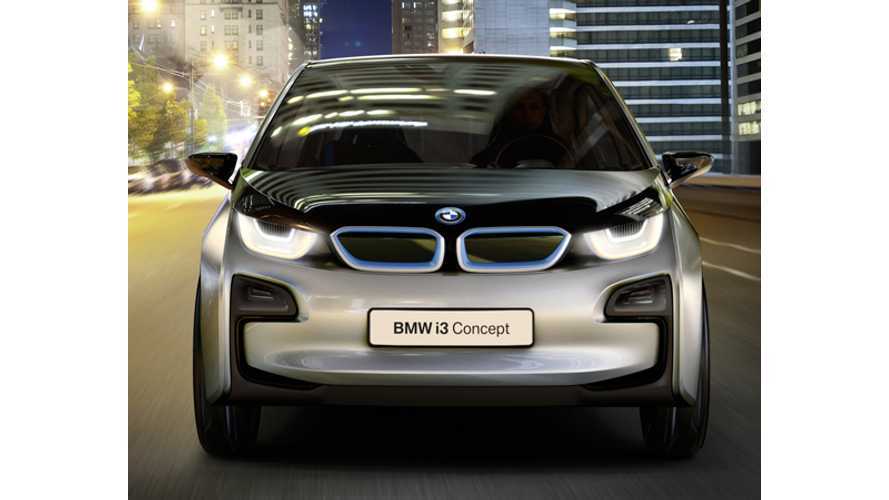 BMW Shows Of Their i3 Concept Coupe At The 2013 NAIAS

Today at BMW's Annual Report Press Conference in Munich, Norbert Reithofer,  Chairman of the Board of Management of BMW AG, gave us some interesting updates on the status of BMW's i3 project while projecting what 2013 will hold for the automaker.

"The future belongs to those who dare to venture",  said Reithofer, as "electromobility will be very much in the spotlight for the BMW Group  in 2013."

BMW Does Some i3 Testing In Public View Earlier This Year

Mr. Reithofer says that the i3's production line is now currently active and has already produced its first pre-series BMW i3s, beginning this past January in anticipation of being on the market "by the end of the year."

Although not readily available for the public to order yet, the BMW executive also added that, "Several hundred advance orders have already been received for  the BMW i3."

Given the limited amount of EVs the public might consider as a "conventional" electric car, one has to assume Norbert is referencing the Nissan LEAF.  As a point of reference, the LEAF weighs about 3,350lbs, making the i3 tip the scales around 2,600 to 2,800 pounds.

The BMW i3 Is Designed With A Carbon-Fibre-Reinforced (made in Washington state) Plastic (CFRP) Passenger Compartment, And An Aluminium Chassis, Which Enables Some Big Weight Savings

Given this significant weight advantage, it is easy to see how BMW expects to eek out the additional miles from a 2 kWh smaller lithium battery (22 kWh).  BMW says that the expected 93 miles of range is "absolutely sufficient in most circumstances" thanks to the knowledge they have gained from both the MINIE and BMW Active E test fleets.

BMW's Maximilian  Kellner, head of product management of BMW i division, does note that range has a lot to do with the driver, and how you operate your i3.

The i3 also has an range extended option that will allow the consumer to drive up to approximately 200 miles (in total), thanks to a small motorcycle engine tucked in the back, and a 9 liter (2.3 gallon) gas tank in the front.

BMW also stressed at the meeting that production times on the i3 are reduced significantly over other BMW products.

"...by employing unique production methods and a significantly lower number of assembly parts. The BMW i3 will require only half the time needed to produce a conventional vehicle."

The BMW i3 deliveries start November 16th, 2013, and the car will make its official debut at the Frankfurt Motor Show in September.  No pricing has yet been released on the vehicle, but figures starting in the mid-$40,000 range are widely expected.