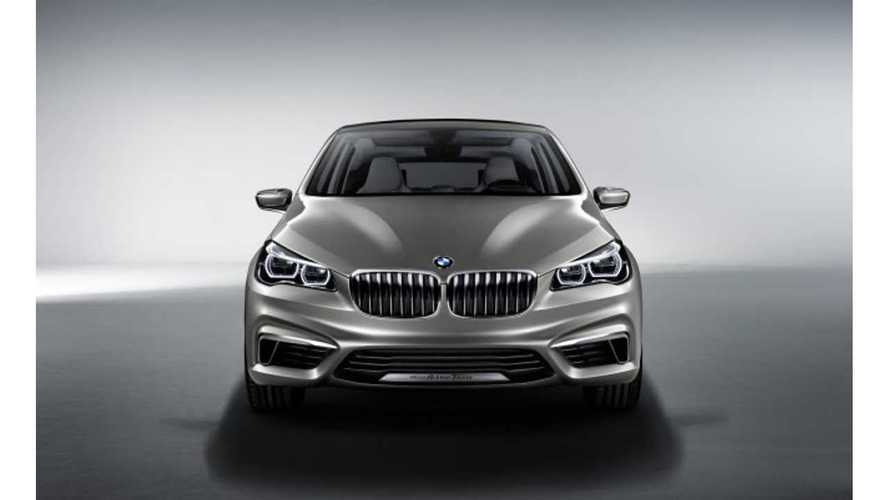 Following the path of BMW’s "pioneering philosophy of sustainable mobility," the German automaker will debut its plug-in hybrid Concept Active Tourer for the first time on US soil at the 2013 New York Auto Show on March 27.

The Now-Required Image of a Plug-in Plugged In

"Offering a glimpse of further innovations in store for the premium compact segment, BMW introduces the Concept Active Tourer – a new plug-in hybrid concept which combines comfort and functionality with dynamics and style while showcasing several innovative solutions.  Featuring an elongated wedge-shaped silhouette, athletic proportions and typical BMW lines, this concept car features a 3-cylinder gasoline engine coupled with an electric motor which allows for nearly 95 mpg.  The Concept Active Tourer will also feature a “Cool Shade” composite glass roof which uses “Suspended Particle Device” technology allowing the driver to make the roof crystal clear or darken with the touch of a button."

That's the press blurb describing the Concept Active Tourer and, in all honesty, little additional information exists.  Here's a bulleted list of the rest of the limited details we know:

If the Concept Active Tourer is your idea of an ideal ride, then there's some convincing, urging and coercing to be done.  BMW says there exists no plans to do a production version of this concept.
++Share