Musk: Stretching US Wait Times To Make 7,000 Model S Deliveries For Europe in 2013, Plus 3-Phase And CHAdeMO Info 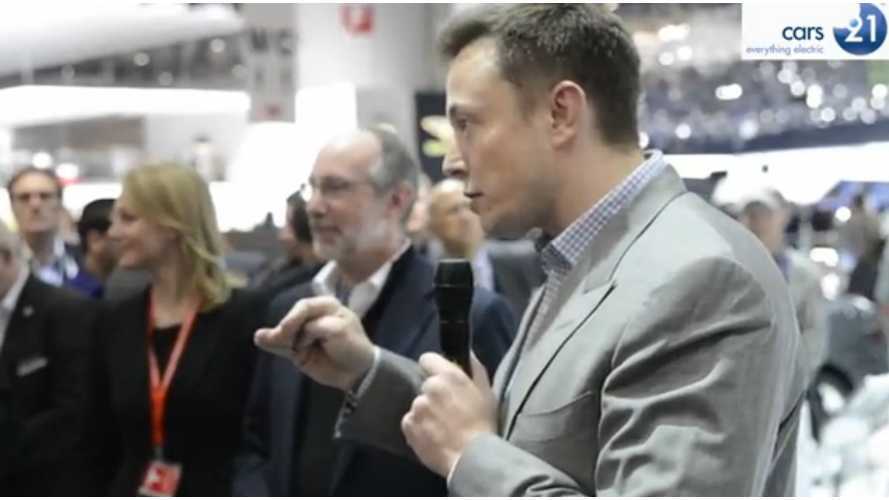 Give GM CEO Dan Akerson, or Akio Toyoda from Toyota a microphone, and prepare for a snooze-fest that you will most likely come away from with no more knowledge than what you started out with.  But give the mic to rockstar CEOs like Carlos Ghosn from Nissan, or Elon Musk from Tesla...and you are always going to learn something.

You can almost see their handlers sweating when they talk in public.

Last week at the Geneva Motor Show, Tesla boss Elon Musk casually took to the floor to talk all things Model S (and X) in Europe, and to field questions from the unwashed masses.

In an effort to please the Euro-crowd, Mr. Musk promised to get the delayed Model S electric sedans into European driver's hands as quickly as possible...at the expense of waiting US customers.  You can almost hear Tesla PR man George Blankenship sigh.

"We are going to end up stretching the waiting time for US cars in order to ensure that the European demand can be met, because we know we were a bit late on European deliveries, and we want to make up for that."

Other additional information we learned (in convienient bullet form) thanks to a Cars21 videotaping (below) of the CEO's walk and talk:

Highlights from the Q&A portion of the CEO's speech (more video of that below):

Q: Status of EU approval for the Model S A: "We have actually gone through almost all of the EU  homologation work already, so its not really a question of timing of approval as the gating factor.  The gating factor for us is the completion of the tooling, and the getting into production with the 3 phase charging.  So that is the real time critical factor."

Mr. Musk then explains (below) how the interior and battery heating system works, as well as to once again clarify the situation behind the NY Times "false-review" of the Model S by quoting some Dr. Suess "Green Eggs And Ham".   Priceless.

Video source: Cars21, and our thanks to Kane over at Samochodye Elektryczne  (PL)