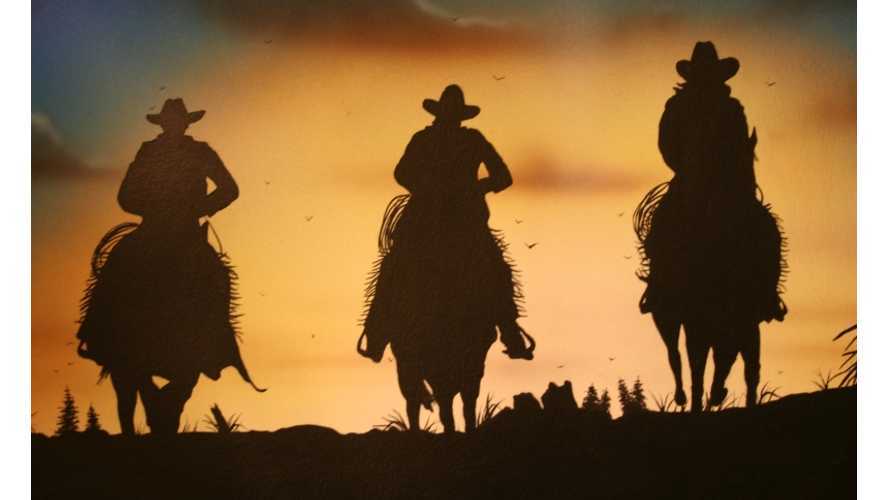 One of Several Chevy Volts in Stock at an Austin, Texas Dealership

Native Texan Cara Vela, owner of a 10-year-old Ford F-350 pickup truck, recently bucked the trend in Texas by purchasing a hybrid sedan.  As expected, she took some heat from her four siblings, who all are lifelong owners of trucks, but feels confident she made the right choice.

"I can keep the 350 in the garage.  But gas ain't ever going back to $1. I hate watching the (gas pump) counter keep rising and rising.  My brothers make fun of me for driving a hybrid.  They're the ones losing money."

Vela purchased a conventional hybrid, but dealers across the state of Texas are seeing an abundance of customers interested in plug-in hybrid and electric vehicles, too.

It's about to get Electric in Austin! Tesla's Gallery at The Domain Opened Friday.

For some dealers, availability of these electrified vehicles is a concern.  Take, for example, San Antonio dealership Jordan Ford.  Jerry Strain, marketing and advertising director for Jordan Ford, says "Right now, our biggest holdup on selling is availability."

So, it seems some Texans are ditching burly trucks in favor of eco-friendly automobiles.

By the numbers, sales of hybrid and electric vehicles in for Ford have surged by 236 percent from 2011 to 2012 in the south Texas region.

And Chevrolet is seeing increased appetite for plug-in vehicles in Texas, too.  Dealers in Texas report that Chevy Volt sales shot up 33% percent in 2012, compared to 2011.

Yes, even Tesla is getting in on the Texan action.  On Friday, Tesla Motors opened its latest US store in Austin.

With sales of plug-in vehicles on the rise, will cowboys riding horseback be a relic of the past?  Umm...No.  But lifetime truck owners trading in for plug-in vehicles is a sign that electrified vehicles are probably here to stay.

via My San Antonio