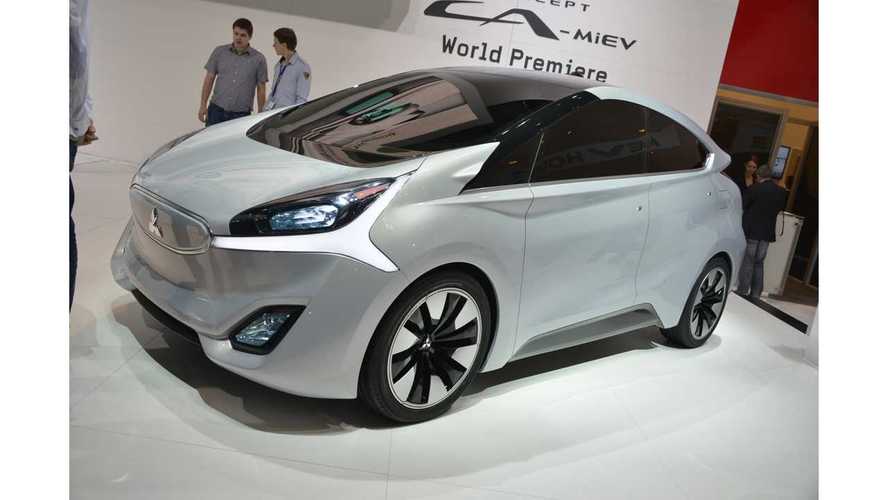 Is the current Mitsubishi i-MiEV just a little bit too small for your liking?  Does it need more range?  More eye-appeal?

If you answered yes to any of those questions, you probably believe, as we do, that the CA-MiEV Concept is a huge step forward for the company.

Mitsu's extra-large mini EV hit the stage today in Geneva, boasting many of the features that current i-MiEV owners say they would like to see in a future generation of the car.

The automaker calls this vehicle their "suburban EV" thanks to its 300 km range (185 miles).

As always, it pays to know what standard is being used to achieve these range projections; in this case it is the overly optimistic Japanese JC-08.  In the US, this car would be rated at approximately 110 miles, which is still excellent compared to other entry-level electric vehicle offerings.  The current i-MiEV achieves 62 miles of range today.

Even more importantly, Mitsu has finally learned that when designing an electric vehicle, aerodynamics means something.  The current i-MiEV is a highway brick, with a cd of .35, causing the super small kei-car to be rated at only 99MPGe on the highway, while getting 126 MPGe in the city.

The new CA-MiEV, thanks to a more sculpted body, a flat undercarriage...and chopping off the side rear-view mirrors (which we are pretty sure you can't do in the real world) gives the sleek concept a drag co-efficient of .26.

So will the CA-MiEV see the light of day?  Mitsubishi will only say officially that "whilst at this stage (the CA-MiEV) is not planned for production."  A wishy-washy answer repeated by Mitsu president, Osamu Masuko, " the CA-MiEV...showcases various technologies that Mitsubishi will look to introduce in the future."

Will say, just go ahead and built it...just don't forget to put the side mirrors back on first.

(top photo via Autocar, show photos in gallery via samochodyelektryczne)