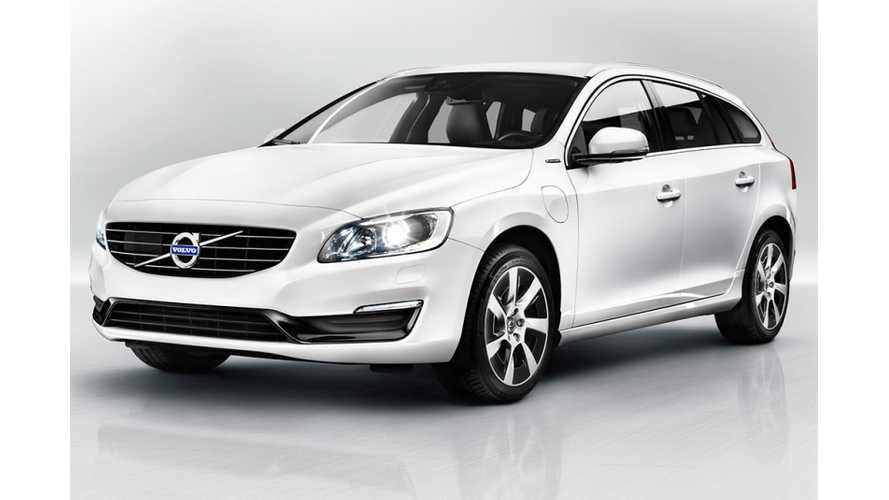 Volvo, after weeks of teases and hints, debuted its revamped 2014 V60 diesel plug-in hybrid at the 2013 Geneva Motor Show.

Stefan Jacoby, CEO of Volvo, stated prior to the unveiling:

"This second-generation hybrid is the perfect choice for the uncompromising buyer who wants a car with low carbon dioxide emissions packed with driving pleasure."

Fitted with a five-cylinder 2.4-liter turbo diesel producing 215 horsepower and featuring a 70-hp electric motor, the capable plug-in wagon zips from 0 to 62 mph in 6.1 seconds.  Electric-only range is listed at up to 31 miles courtesy of an 11.2-kWh lithium-ion battery pack.  Torque is impressive at 472 pound-feet.  Total driving range is 560 miles.

Changes made to the electrified V60 basically sweep across the entire V60 lineup.  Production of the 2014 V60 plug-in hybrid begins in April.  Deliveries are scheduled to start in July.

"The V60 Plug-in Hybrid has been a worldwide success with the initial run of 1000 cars sold out before the car reached the showrooms."

More importantly, Volvo will now offer the V60 Plug-In Hybrid in a full range of colors and specifications, no longer limiting buyers to the loaded and expensive "Pure Limited" version.  Lastly, production is set to increase from 1,000 units last year to nearly 4,000 units this year, which means more potential buyers will get a crack at purchasing Volvo's diesel plug-in wagon.  Win!