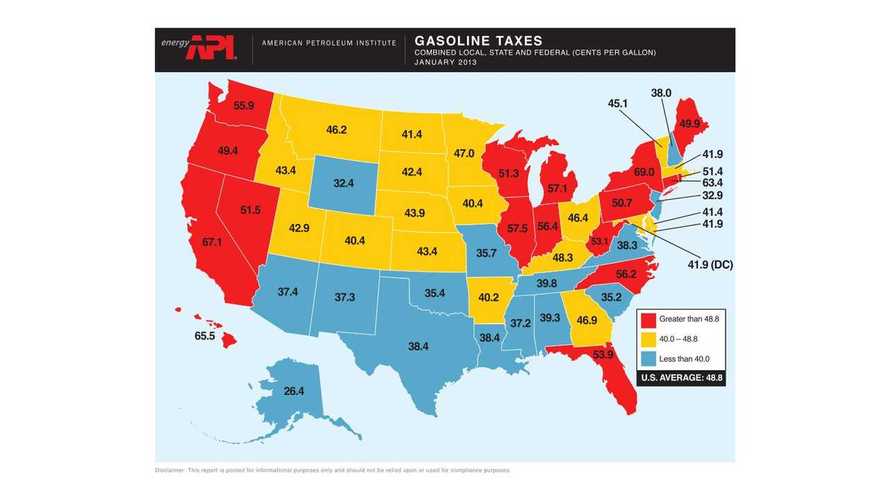 As you may have read here the Virginia General Assembly, recently approved a $100 annual fee on all hybrids and plug-ins.  They also did the following:

400 More Of These Now Needed For Plug-In Owners

Like most states,  the Virginia transportation system is funded primarily by the tax on gasoline.   However, that 17.5 cents per gallon had not been raised since 1987 when gas was hovering around $1.00/gallon, leaving our road construction budgets underfunded.  Since the price of oil is one of the biggest drivers of road construction cost, the gas tax should have been fixed to the price of oil or gasoline itself.  The problem is further compounded by a motor vehicle fleet increasing in fuel efficiency, and therefore using less gas per car.

The states in red above have figured out that a fixed rate per gallon tax does not work and have for the most part put in place percentage based gas taxes that fluctuate with the prices of gas.  Raising the gas taxes is a concern because doing so tends to effect lower income households greatly.  Tax credits for gas taxes, targeted at lower incomes has been suggested.

Bob McDonnell Has A Plan For Getting Revenue For Virginia's Transportation Infrastructure...But Not A Good One For Plug-In Drivers

In Virginia,  Governor McDonnell wanted to abolish the gas tax altogether and increase the sales tax on all goods except gasoline.  What passed was a pro tempore lower gas tax.  Critically, the lower 3.5% tax on gas is predicated on the passage of the Federal Marketplace Equity Act (FMEA) that authorizes states to collect taxes on Internet sales to residents in its state.   In Virginia, a substantial portion of projected revenue from Internet Sales Tax is to be used to make up any lost revenue on the new lower gas tax.  If the FMEA legislation fails to pass then the gas tax will automatically rise to 5.0%   With gas at $3.40/ gallon this is more or less equal to the flat 17.5 cents per gallon already in place, but if gas rises above that level, the 5% gas tax would obviously result in a tax increase.

Governor McDonnell had pitched abolishing the gas tax as saving consumers money, and most major media have stated the same, but the example of our neighbors just to the south shows clearly this is not the case.  North Carolina pays nearly 58 cents per gallon when federal, state and local taxes are averaged in.  In Virginia that figure is 38 cents per gallon.    We should have gas that is 20 cents per gallon cheaper.  The pricing info is convoluted, so an exact number is hard to give, but it varies between two and nine cents per gallon cheaper in NC.  Where does the missing 11 to 18 cents per gallon go?  A Virginia petroleum lobbying organization was asked by the Richmond Times Dispatch where that money goes and the response was basically “that information is proprietary.”

Even if the elimination of gas taxes resulted in a penny for penny drop in the price of gas, it is very likely that the higher sales tax would cost most consumers more money.

This idea of abolishing gas taxes is one the oil industry likes very much, because they take the lion’s share of any “savings.” Business in general likes the idea as well, because a cost they used to absorb is typically passed on to consumers in the form of higher sales tax.  In the end Governor McDonnell did not get the gas tax abolished but he did succeed in getting a plan through which will raise the needed money for road construction.

The $100 annual fee on hybrids/EVs is bitterly disputed.   People without a hybrid or plug-in feel like those with a plug-in are free loading by not paying their fair share at the pump, and some are more than just a little bitter about the large state and federal tax credits available to plug-ins.

Those with traction batteries in their cars feel like they pay more up front and therefore more sales tax and this more than makes up for any lost revenue from gas taxes. Not to mention going out on limb to buy new, expensive technology that presumably helps the environment and reduces dependence on foreign oil and pollution.  Efforts they feel are punished by this fee.

In Virginia, despite an impressive turnout out of protesters against the fee, it was included in the recently passed legislation with apparently very little resistance from legislators.

Depending on your mileage the $100 annual fee may be a bargain or a rip off, but as more states struggle in a weak economy to get funds to meet their needs, owners of hybrids and plug-ins who tend to be more affluent appear to be an easy target for politicians.  Expect to see more states follow suit.