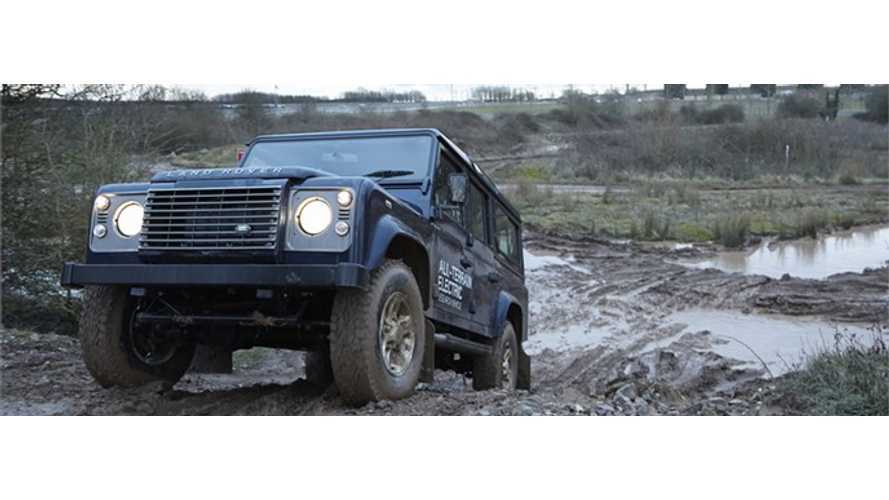 It's only a research vehicles at this point in time, but Land Rover does say the electric Defender will enter "real-world" trials in late 2013.

In the electric version, gone are the 121 horsepower, 265 pound-feet of torque 2.2-liter diesel engine and 6-speed manual gearbox.   Those units have been replaced by a 94-hp, 243 pound-feet of torque electric motor and the fuel tank has been replaced by a 27-kWh lithium-ion battery pack that weights 904 pounds.  Curb weight ranges from 4,530 to 4,766 pounds, depending on body style (pick-up, hard top or station wagon)

Range is claimed at 50 miles, but Land Rover would rather us state this as 8 hours of continuous use in typical, low-speed off-roading situations.  The battery can be charged from empty in as little as four hours.

Land Rover's primary statement on the electric Defender is that it's "Engineered to deliver zero emissions while retaining legendary all-terrain capability."

Therefore, it's fitting that the electric SUV retains the Defender’s legendary four-wheel drive system and differential lock.   But there's something unique to the electric version, especially when in Hill Descent Control mode.  Here's how Land Rover describes it:

"Regenerative braking has been optimized to such an extent that using Hill Descent Control, the motor can generate 30kW of electricity. Because the battery technology can be charged very quickly at a rate of up to twice its capacity of 54kW without reducing battery life, almost all of the regenerated energy can be recovered and stored. Up to 80 percent of the kinetic energy in the vehicle can be recovered in this way, depending on conditions."

Land Rover says 7 of the electric Defender research vehicles will hit the trails later this year and though only called "research, "Antony Harper, Jaguar Land Rover head of research, provides us with a bit of hope that the gear found on this electric rock-crawling machine might make it into future Land Rover production vehicles:

"This project is acting as a rolling laboratory for Land Rover to assess electric vehicles, even in the most arduous all-terrain conditions. It gives us a chance to evolve and test some of the technologies that may one day be introduced into future Land Rover models."