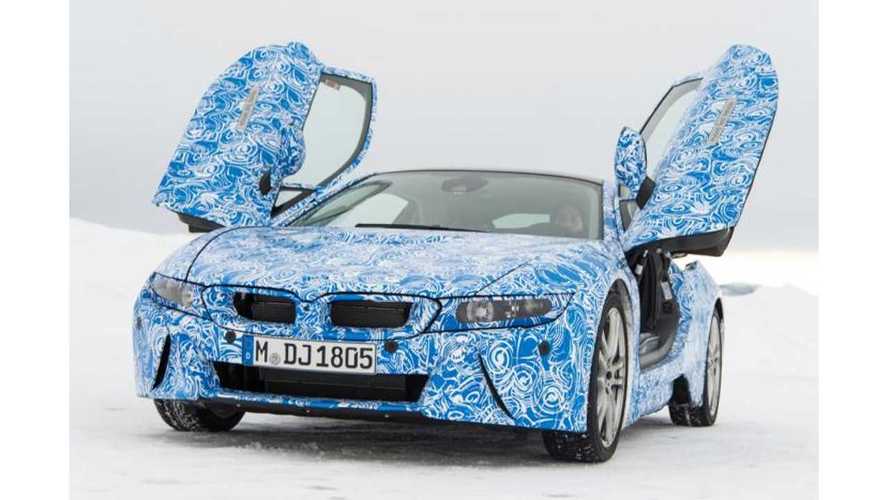 BMW i8 Out in the Snow

While the BMW i3 may have more mass appeal, the plug-in hybrid i8 is more a true BMW, with performance that is fitting of the German automaker.

On Tuesday, we brought you a recap of the first drives of the BMW i3.  Today, it's the i8's turn.

BMW i8 Zips Along

This time, we turn to the folks at AutoExpress who had the rare opportunity to test out BMW's i8 plug-in hybrid on snow-covered roads in northern Sweden.

Here are some snippets from AutoExpress' time spent in the passenger seat:

"We’re sitting beside a BMW engineer for this first taste of the i8. He slides the gear selector into D and we’re off. As long as the driver doesn’t accelerate hard, the i8 remains in electric-only mode. So all we hear from the i8’s powertrain is a gentle buzzing noise."

"But the serious fun starts when the petrol engine kicks in. The i8 accelerates with impressive force, accompanied by a great noise from the engine and turbocharger. Despite the hi-tech powertrain, it feels like a traditional rear-engined, rear-wheel-drive car, such as the Alpine A110."

"There’s nothing old-fashioned about the way the i8 handles, though. It felt very agile from the passenger seat, even on the snowy roads of our test. This is down to dynamic stability control, 50:50 weight distribution and how the flow of power to each axle is managed. Switch off the traction control completely, and the rear-drive set-up really comes into its own."

The BMW i8 plug-in hybrid reportedly zips from 0 to 62 miles per hour in 4.6 seconds and can post a top speed of 155 mph.  Power for the BMW i8 comes from a 126-kilowatt (170 horsepower) electric motor spinning the front wheels. Meanwhile, a 1.5-liter, three-cylinder turbocharged gasoline engine rated at 233 horsepower and 295 pound-feet of torque will spin the i8's rear wheels. Combined, horsepower peaks at 393 and torque at 406 pound-feet.  Specs are still tentative at this time and seem to change slightly on a monthly basis.

Fuel consumption (on the lenient EU cycle) is listed at 104.6 miles per imperial gallon (86 miles per US gallon).  Electric -only range is now pegged at 22 miles and charge time is less than 2 hours.  Curb weight is 3,263 pounds.

Oh.  Time for one last quote.   This time from the BMW engineer who piloted the i8 for this first ride:

"Believe me, it’s not easy for an M3 to follow this car."