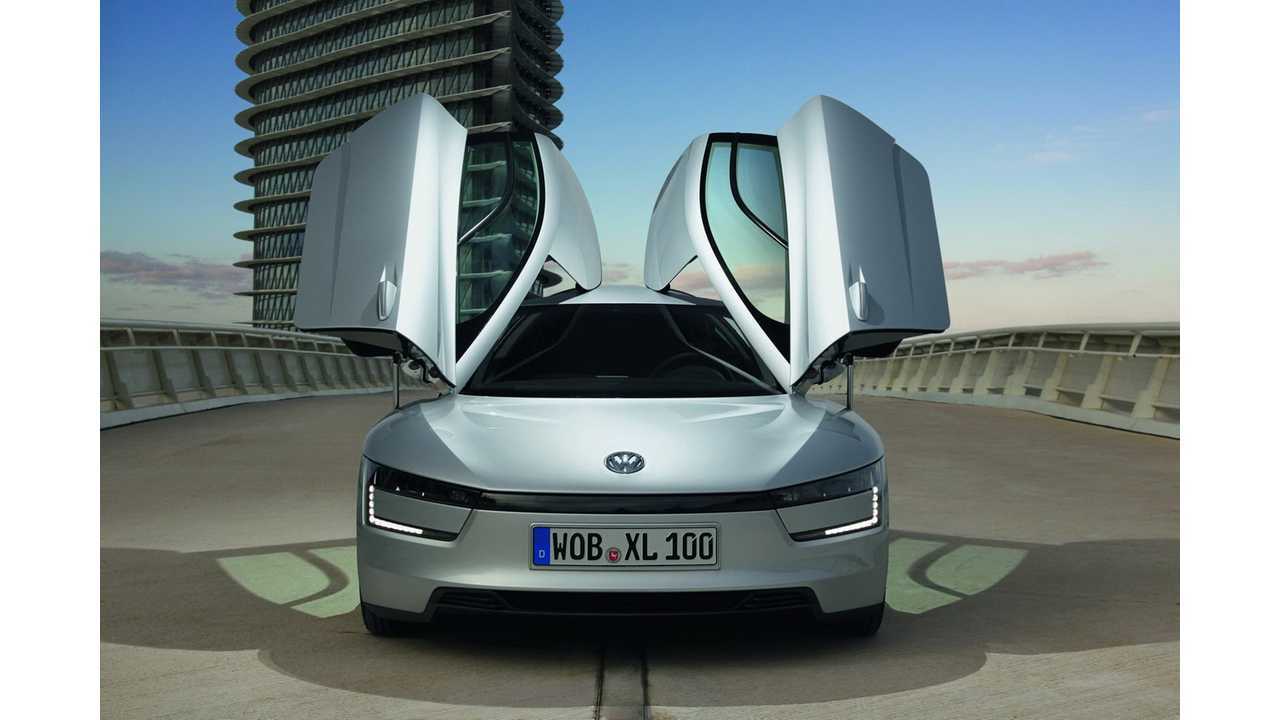 VW's assault on the plug-in market continues with the announcement that the production-intent version of the  XL1  will make its worldwide debut at the Geneva Motor Show next month.

Volkswagen says that the XL1 will be most fuel-efficient car on the plant, with a UK rating of 313 MPG, or 261 MPGe here in the US, although the eventual US MPGe figure will be lower given the discrepancies between the EPA and the European NEDC testing system.

Based on other vehicles rated on both systems, we can fairly accurate assess that the US efficiency number will be around 175 MPGe; still far and away ahead of the EPA's current leader, the Scion iQ EV at 121 MPGe.

The futuristic looking 2 seater from VW has a plug-in hybrid power-train that comprises utilizes a .8L two-cylinder TDI diesel engine that puts out 47hp, and a 20kW electric motor, good for 27HP via a 7-speed dual-clutch transmission.

The car's two passengers sit slightly askew from each other due to the narrowness of the vehicle, and entry to the car is via 'gullwing' doors.

Helping the XL1 achieve it's amazing efficiency is the small sizing of the car, as it is very, very small (just 65.5 inches wide and 45.5 inches tall), with a body made of carbon fiber reinforced polymer.  Aerodynamics of the car come in at a Cd rating of just 0.18.  Total weight?  1,753 pounds.

No pricing is yet available on the car, but production is expected to be very limited, so we estimate a price between $80,000-$95,000, and to look for VW to probably only lease the car.

On who would buy such a vehicle, project leader, Holger Boch said, "The people who buy it will be people who like technology and who like being seen in a low-CO2 car."

We do not anticipate adding it to our monthly plug-in sales scorecard anytime soon.